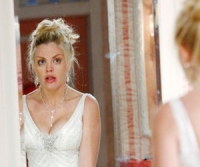 (SoapOperaNetwork) — A look at what’s happening on “One Life to Live” during the week of February 14, 2011.

Starr and James separately recount how they met one other.  Todd catches Dani and Nate in bed together on Wednesday, February 16.  Starr and James jump to Dani’s defense, before having a chance to work out their differences.  Blair and Cristian swap stories about their stagnant loves lives.  Blair makes a confession about Tomas.  Later, she becomes  intrigued about him when he gives Langston some advice.  And Todd fears Dani has run away from home.

The Inside Story: Broken Families
John forces Natalie to tell Jessica and Brody the truth on Monday, February 14.  Ford is shocked to learn that he is a father.  Viki, Rex, and Gigi remained concerned for Charlie, not realizing he went to see Echo.  Tess gains control.  Joey and Aubrey wed.  Brody and John argue.  Natalie makes an admission to Viki.  John and Kelly discuss the horrible states of their loves lives.  Starr keeps Langston company.  Ford meets Tess, who has a proposition for him on Wednesday, February 16.  A lonely Langston is confused by what she sees.  Brody and Natalie has things out.  And Rama seeks out someone’s help.

A Closer Look: On the Rebound
John and Kelly get into an altercation.  Clint receives some encouraging news.  Téa agrees to defend Vimal.  Ford helps Tess.  John and Kelly find themselves too close for comfort on Friday, February 18, and try to convince themselves of their true motives.  Natalie misinterprets what she sees.  Charlie feels guilty.  Dorian is worried about Kelly.  Joey has some news for his parents.  Aubrey threatens to blackmail Clint — again.   Joey and Rex bond.  Rex gets up in Clint’s face.  Téa and Nora offer Vimal a deal, however, things don’t go as planned.  And Cutter talks to Dorian about Joey and Aubrey’s wedding.