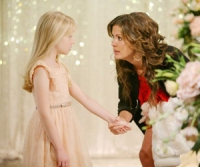 (SoapOperaNetwork.com) — A look at what’s happening on “All My Children” during the week of February 14, 2011.

Scott’s announcement about Madison’s baby stuns everybody on Monday, February 14. Ryan and Greenlee are pronounced husband and wife. Scott and Madison discuss his wedding day surprise. Liza gives Asher some advice concerning Colby. David tells Liza why she should give the new David a chance. An upset Bianca pushes Erica to work things out with Jack. Erica bristles at what she sees on Tuesday, February 15. On Wednesday, February 16, Bianca makes one last bold effort to save her marriage. Kendall consoles Bianca. Bianca turns to Marissa for help with her divorce. Griffin and Ricky declare war on each other as they jockey for position with Kendall. On Friday, February 18, Ricky has no results to show when confronted on his progress with getting the evidence Zach had on the mob-casino situation. Diane (Ella Thomas) warns Ricky to get his priorities straight or she’ll make sure he makes Kendall pay the price.

The Inside Story: Runaway Train
JR races back to Annie’s side after being released. Annie smashes a gas pipe and locks a barely conscious Marissa in the attic to die. JR is stunned when Annie admits what she has done. JR saves Marissa in the nick of time. Marissa and JR search Annie’s room for clues. JR tries to explain himself after Marissa realizes that he’s been lying to her all along on Tuesday, February 15. David offers Annie his assistance in disappearing with Emma after catching her in the act. Ryan confronts JR for answers after realizing Annie has taken Emma. JR tries to fix things with Marissa. Asher supports JR. Greenlee consoles Ryan who receives a message from Annie and Emma. On Thursday, February 17, Ryan blasts JR for turning a blind eye to Annie’s condition. Ryan continues his search. Jesse gives Ryan a photo of David and Annie taken right before she fled.

A Closer Look: In Love & War
Jake tries to reassure an insecure Amanda of his love. Amanda bristles when Cara refuses to remove Jake’s wedding ring from around her neck on Wednesday, February 16. Tad warns Jake that Cara is dead is she returns to Doctors Without Borders. Amanda reports Cara to immigration for fraud. Tad puts an elaborate plan into motion to fool the warlords on Cara’s trail. Amanda tries to fix what she’s done after a chat with Tad. Cara is taken away by two men in suits as Amanda watches from afar.