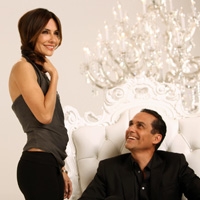 (SoapOperaNetwork.com) — While the drama began on today's episode, the real fireworks will be set off next week on ABC's "General Hospital" as Sonny Corinthos (Maurice Benard) and Brenda Barrett (Vanessa Marcil Giovinazzo) prepare to say "I do!" The question is not if they wed, but what happens next?

Thanks to ABC, Soap Opera Network is able to provide you with a closer look at next weeks action and adventure. For those that remember the good old Guza ("GH's" head wirter) days, you should look at this clip as "clink boom: part II."

PROMO DETAILS:
After years of trying to fight their fate. Brenda and Sonny vow to love each other for life. Next Week on General Hospital, one couple with the brightest of futures can't seem to escape the enemies of their past. Now Sonny's new life with Brenda could be over before it begins.