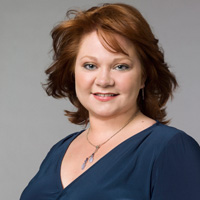 (SoapOperaNetwork.com) — The former “One Life to Live” starlet makes an appearance on HBO’s new series “Boardwalk Empire.”  Set in Atlantic City during the Prohibition era of the 1920’s, the show is directed by Academy Award winner Martin Scorsese and written by “The Sopranos” Emmy-Award winning scribe Terence Winter.  It is based on the Nelson Johnson book Boardwalk Empire: The Birth, High Times, and Corruption of Atlantic City.

In the episode, which she taped back in the spring, Brier plays the legendary singer Sophie Tucker.  “I had a blast playing her, and am also planning to put together a stage show of her songbook in NYC and perform it sometime around the time my appearance airs on HBO,” she comments on Facebook.

Brier played Marcie McBain on “One Life to Live” from 2002-09, and was nominated for a Daytime Emmy Award for Outstanding Supporting Actress for the role in 2004.  Outside of “OLTL,” she has an impressive Broadway resume, most notably for her portrayal of Tracy Turnblad in “Hairspray.”  Brier is also and accomplished musician.

“Boardwalk Empire” will premier this fall on HBO.  Visit the show’s official website for more information.

“All MY Children,” “One Life to Live,” and “General Hospital” air Weekdays on ABC. Weeknights on SOAPnet. Anytime on ABC.com and SOAPnet.com. Check local listings.