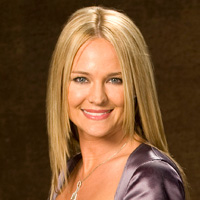 Lily recreates Paris for her and Cane, Monday, January 24. Jill doesn’t get the congratulations she hopes for when she announces to family and friends her engagement. Tuesday, January 25, Colin continues to taunt Cane with his presence. Nikki turns to Deacon when she’s tempted to fall off the wagon again. Cane tells a dumbfounded Lily more about his past Friday, January 28.

The Inside Story: Thrown to the Wolves
Sharon is floored when Christine, along with FBI Agents arrive to arrest her for the death of Skye. She immediately turns to Victor and demands that he tells the truth but Victor, who is unmoved by her pleas, ignores her. She soon is handcuffed and escorted out of the club. When she’s at the station, Christine shares the evidence that has Sharon in the situation that she is in: the recording of her and Skye arguing by the volcano. Sharon insists that she didn’t do anything to Skye, but Christine points out that based on the evidence that they received, she could be spending the rest of her life behind bars. More devastation comes to Sharon when she is told that bail will be set at 5 million dollars. News soon travels when Nick arrives and he outright admits that he thinks she is guilty; Sharon tells him that she never touched Skye. Adam, in the meantime, tries his best to turn the blame on Victor, but Christine turns a deaf ear to his accusations. Back at the holding cell, Sharon tries her best to get Nick to believe that she didn’t murder Skye and tells him about the bail. Nick, however, tells her that he will not put up the money to get her out of jail. Nick does, however, inform Noah about Sharon’s arrest. When their son hears this, he heads over to the jail and blasts Sharon for her need to be with Adam rather than her own family. In the meantime, Jack is approached by Adam, who tells him about Sharon being arrested for a crime Victor had to have committed. He too, asks Jack to help, but Jack coldly tells him that Sharon is no longer is business or concern. As everyone turns their back on helping, let alone believing Sharon, Sharon receives a visit from the one person she doesn’t want: Phyllis. Phyllis instantly gloats at her rival being in jail. Sharon snaps telling the red-head that if she truly wanted to do away with someone, she would have gotten rid of her a long time ago. With those honest words said to her, Phyllis believes that Sharon didn’t do the deed. Meanwhile, Nick confronts his father demanding to know what exactly happened when he whisked Skye to Hawaii. Victor refuses to answer but immediately calls Michael once Nick has left: he wants him to pay the 5 million dollar bail, but to keep his name out of it.

A Closer Look:Don’t Mean Maybe, But That’s His Baby
As Daniel continues to hold Lucy, he is flooded with the memory of helping deliver her before Daisy hit him and ran off. Without sharing his memory, Daniel finds himself in awe that Victoria and Billy have instant love for his baby that they’ve adopted. Once by himself, he begins to ponder what to do with his revelation. He soon finds himself approaching Kevin, vaguely telling him that he has a feeling he knows where his baby may be. The two friends have a heart-to-heart and once all is said and done, Daniel makes a vow to keep quiet about being Lucy’s father and that the best place is in fact with Billy and Victoria.