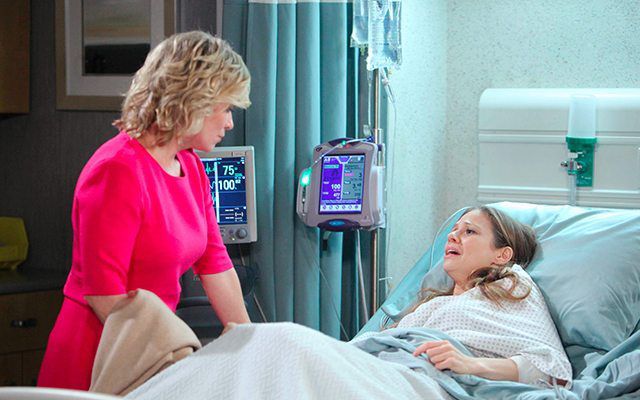 (SoapOperaNetwork.com) — A look at what’s happening on “One Life to Live” during the week of January 3, 2011.

David’s escape attempt hits a brick wall on Tuesday, January 4, while the residents of Llanview watch his Have-A-Seat hemorrhoid commercial on TV. Viki offers Dorian some love advice. Rex is tormented over keeping Clint’s secret about David.  After receiving some bad news from Clint, David manages to contact Dorian. And on Friday, January 7, Dorian grows wise to Echo’s latest scheme and follows her and Charlie to an AA meeting.

The Inside Story: Keeping Secrets
Marty crashes John and Natalie’s wedding on Monday, January 3. In severe pain, Jessica is rushed to the hospital. Viki takes her place at Jessica’s bedside. Natalie has it out with Marty on Wednesday, January 5. John is concerned about Natalie. Marty suffers an accident. Natalie’s plan to keep Marty quiet backfires when she starts having labor pains. Natalie’s pleas fall on deaf ears on Friday, January 7. Vivian gives Jessica some troubling news about the baby. Clint lashes out at Charlie, blaming him for his daughter’s predicament. And Viki and Brody persuade Jessica to go ahead with a risky medical procedure.

A Closer Look: Love is Overrated
Joey and Kelly nearly kiss on Monday, January 3. Kelly shares her suspicions with Rex. Gigi wants some alone time with Rex, while Kelly hits the sauce. Cristian gets a surprise when he calls Layla. Aubrey and Cutter reconnect. Nora continues to keep her distance from Bo. Matthew questions Nora. Starr confides to Langston about her New Year’s Eve with James. Blair and Cristian wake up next to one another. Rex suggests to Bo that Inez may be lying. Meanwhile, Nora gives Inez a piece of her mind. Later, Inez gets emotional when Bo confronts her. James talks to Starr about their future. Starr and Dorian have a nice chat on Thursday, January 6. Blair sees herself in the contents of Eli’s box. After talking with Bo, John places renewed suspicion on Inez regarding the murder of Eddie Ford. And Téa’s actions prove to be in vain when Nate makes a confession.