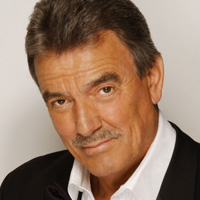 Jana drop kicks Noah when she learns that Kevin is coming over to see her on Monday, November 1 That same day, Daniel finds himself in a bind when Daisy makes a serious threat. Lily wants answers when she spots Blake and Cane in their home. Wednesday, November 3 Billy vows to take Victor down.

The Inside Story:Relishing for Revenge
After sharing the news Kay about Nikki's drinking and her 'relationship' to Deacon, Victor begins to wonder if he truly wants to be Nikki's husband. He also ponders if Nikki's being near him is what has pushed her toward turning to the bottle. Kay stresses to her friend to not give up on her. As the two are talking, Murphy tries his best to get Victor's attention when he makes mention how helpful Meggie has been to him, but Katherine and Victor find it hard to make out what he's trying to say. In the meantime, Meggie and Deacon talk on their next steps to keep Victor and Nikki apart. When Meggie boasts that she intends to marry Victor and kill him to inherit his fortune, Deacon begins to question his involvement. Meggie quickly realizes that the young man has feelings for Nikki and warns him that things could get bad for him if he doesn't follow her instructions. Later, Victor confides in Meggie letting her know that Murphy is still unable to communicate. Seeing his worry for his friend, she plays on those feelings to get closer to him. Once by herself, Meggie begins to see what her future will be like as the widowed Mrs. Newman. Victor soon finds himself face-to-face with Nikki and they both exchange heated words. Nikki accuses Victor of never loving her, but only Newman Enterprises. He leaves her stunned and shortly after, she turns her attentions toward Deacon. Meanwhile, Meggie has the ultimate plan in getting Victor where she wants him; and a ring on her finger.

A Closer Look:A New Beginning
JT learns that because of the accident and his damaged heart, he is unable to return back on the force. Being there for him, Mac talks with JT and they both start to consider their options for themselves. Mac is overjoyed when Brock comes back to Genoa City to be a part of her and JT's wedding. That day, at the Chancellor Mansion, JT and Mac tie the knot. The newlyweds pack up for a new chapter in their lives. Hearing the news that JT and Mac are moving away, Victoria is devastated to learn that she will not only be saying good-bye to JT but also Reed.