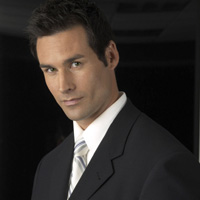 (SoapOperaNetwork.com) — While actor Paul Leyden has been off of CBS' "As The World Turns" for sometime, his debut on CBS' "The Young and the Restless" in the coming weeks is sure leading some to believe there is an invasion in place of the now canceled soaps past and present stars.

Soap Opera Digest is reporting that Leyden has been cast in the role of Blake on daytime's number one drama series. He begins filming on Tuesday, September 7 with his first airdate set for Wednesday, October 6. In it a bit of irony, former "World Turns" co-star Maura West began taping on Wednesday, September 1 with her first air date set for Friday, October 8 as a recast Diane Jenkins, which is two days after Leyden debuts, but one week after West began taping. Got to give it to tricky editing if air dates remain in tact.

Leyden began airing in the role of Simon Frasier on "As The World Turns" in February 2000 and appeared off-and-on until June 2004. He returned to the soap for a seven month turn in June 2006 and again in November 2009. He starred along-side television icon Heather Locklear ("Dynasty," "Melrose Place" and "Melrose Place 2.0") in the failed 2004 NBC drama series "LAX," which also starred actor Blair Underwood ("The Event" and "Dirty Sexy Money"). Leyden wrote, produced and directed the 2009 short film "Bye Bye Sally," which also starred another "World Turns" alum Paolo Seganti.