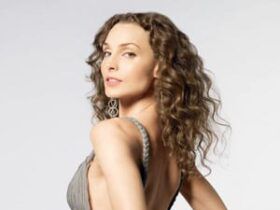 Rex and Gigi’s questioning of Nurse Wojohowitz reaches a dead end when she can’t recall who left him at the hospital when he was a baby. However, she does give him half of a locket that was left inside his baby blanket on Monday, April 19. Elsewhere in Llanview, Bo and Nora tell Clint of their engagement. Danielle and Nate have their kiss while rehearsing for the musical on Wednesday, April 21. Matthew confides his feelings for Danielle to Destiny. And Viki pushes Jessica to go the prom even though Cristian is taking Layla.

The Inside Story: Suspicious Minds

While John tends to an unconscious Marty, Natalie goes off to get help. Coming back to her senses, Marty informs John that her fall was no accident. Later, after being examined by Dr. Morrison, they anxiously await the results of the sonogram. Meanwhile, Téa bumps into Todd, who remains in a foul mood on Monday, April 19. Once alone, Téa begins to wonder if Todd may be to blame for what happened to Marty. On Tuesday, April 20, Marty points a guilt finger at Natalie, and tells John about their argument at the coffee shop. Téa confronts Todd with her suspicions. Starr is angry at Todd for his treatment of Cole, but makes it clear to her boyfriend that her dad will always be a part of her life. Natalie is furious after realizing that John thinks she might have been the one who pushed Marty down the stairs, and tells John she’s sorry about the baby whether he believes her or not. After John leaves, Natalie breaks down in tears on Wednesday, April 21. At the same time, Todd is angered by Téa’s accusations, however, once alone, calls the hospital to try to get an update on Marty’s condition. Starr and Cole make-up, promising to never again let Todd come between them. By Thursday, April 22, Marty stands by her earlier statement that Natalie is to blame. John vows that justice will be served. Brody tells Natalie that he believes her. John spots Natalie at the crime scene. Cole confronts Todd when he finds him outside Marty’s hospital room on Friday, April 23. While being questioned by Brody, Marty begins to think that Todd may actually be the guilty party. John finds a clue. And Natalie is heartbroken that John has lost all faith in her.

A Closer Look: Cramer vs. Cramer

Viki makes a decision about her future with Charlie on Monday, April 19. Although she gives Charlie her blessing with regards to Dorian’s job offer, she warns her nemesis not to try anything funny. After a scratchy encounter, Blair is oddly nice to Kelly. Langston and Ford take an advantage of the free room at the Palace that Llanview University booked for a famous film director on Tuesday, April 20. Markko nearly encounters their duplicity when he dresses as a bell boy in hopes of delivering room service to his mentor. Fortunately for Langston, she manages to hide before Markko see her, however, she soon storms off after watching Ford toy with Markko. By Thursday, April 22, Langston promises Starr that she is finished with Ford. However, he still has her under his thumb when she tells him the relationship is over. Kelly is surprised when Rodney turns up in her office at the Sun. Shaken at first, she quickly realizes he means her no harm on Friday, April 23. Shocked that he can speak after all, Kelly receives conformation from Rodney that Melinda was murdered, but will only talk to John. After leaving Rodney to contact John, Kelly makes a gruesome discovery upon returning to her office. Starr warns Hannah to stay away from Cole. And Eli asks Blair about her relationship with her cousin Kelly.