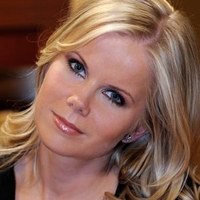 Rex and Gigi rejoice over the fact that they were finally able to turn the tables on Stacy. In the parking garage, Gigi encounters a menacing Stacy, who’s vandalized Gigi’s car with a crowbar. Stacy warns Gigi that the competition for Rex is just beginning. Gigi, having been pushed too far, attacks Stacy. Stacy ends up falling down the stairs after lunging at Gigi. Rex angrily demands answers from Roxy.

Cristian reads the cryptic letter that Fish left for Kyle. Layla takes Fish to task for going back on their agreement not to tell anyone at work that they’re dating. Fish explains that it’s important to keep up a macho image in front of the other cops. Fish pulls away from Layla’s amorous advances.

Starr asks Cole to spend the night with her before he starts his undercover work.