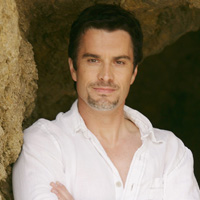 (SoapOperaNetwork.com) — After some tricky editing, Rick Hearst’s return to CBS’ "The Bold and the Beautiful" as Whipple ‘Whip’ Jones III could be sooner than you think.

According to sources, Rick Hearst’s first airdate has been modified and he will now first air on Thursday, July 16. He was previously scheduled to return to the soap on Friday, July 17. His return date just so happens to coincide with the return of Victor Alfieri as Giovanni Lorenzano.

After being dropped to recurring status by ABC’s "General Hospital" in April, after portraying Ric Lansing for five six-and-a-half years on the soap, Hearst signed a contract with "B&B" in May and began taping right away. His first tape date was Wednesday, May 20. Hearst last aired on "GH" on Friday, June 26.

"When ‘B&B’ called, it was for a contract role, so I had to decide if this was something I wanted to do that wouldn’t leave ‘GH’ in a lurch," Hearst said in a recent interview with Soap Opera Digest. "If this had not worked out with ‘B&B,’ I would’ve continued to be on recurring with ‘GH,’ but still invest in other opportunities."

Hearst’s first scenes are said to be with Susan Flannery’s Stephanie Forrester and Jack Wagner’s Nick Marone as they discuss Whip’s future employment at Jackie M.

For Victor Alfieri, who last appeared on "B&B" in 2004, this is a return to daytime and the role that made him an international star ("B&B" is the world’s most watched soap afterall). Giovanni has been recruited to photograph Steffy Forrester (Jacqueline MacInnes Wood) for an upcoming fashion shoot as her friends and family look on.

Since leaving the soap, the actor has appeared in a number of television series and films. In 2005 he appeared in an episode of ABC’s "Alias," while in 2006 he guest-starred on CBS’ "CSI: Miami" and had a story arc on NBC’s "Passions" as Gianni Valentino. Recently, he starred in the international blockbuster "Angels & Demons" as Lt. Valenti. The film starred Tom Hanks as Robert Langdon.

"The Bold and the Beautiful" airs Weekdays on CBS. Anytime on CBS.com. Check local listings.