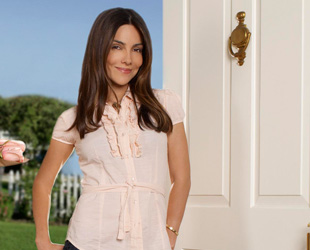 (SoapOperaNetwork.com) — She played her cards and brought in the crowds. She is no fool, but she has your attention. Will 2009 bring about the return of one Vanessa Marcil? “General Hospital” better hope so.

Vanessa Marcil (ex-Brenda Barrett), in a recent interview with Soap Opera Weekly magazine’s Gabby Winkel, has made it clear that 2009 could be the year that she finally returns to the ABC soap after a six-year absence. Vanessa left the soap after a six-month stint in 2003.

“We were trying to fit it in this past year, but it didn’t work out, so maybe in ’09 we’ll find a way,” says Marcil. “It’s definitely in the cards at some point.”

Marcil’s brief return to the ABC soap in 2002 marked the series’ best ratings performance in nearly a decade. During a single week in the all important February Sweeps period in 2003, “GH” had 4.1 million households and 5.3 million total viewers tuned into the trials and tribulations of Brenda and her series of men (Sonny Corinthos and Jasper “Jax” Jacks). Today, “GH” has lost about 86% of that audience as it hovers around a 2.2 household rating and just under 3 million total viewers. As you can see, the actresses possible return to the soap couldn’t come fast enough.

Vanessa joined the cast of “General Hospital” as the conniving Brenda Barrett, whose mission was to tear apart Jagger Cates (Antonio Sabato Jr.) and Karen Wexler (then played by Cari Shayne), in 1992. In 1998, she opted to leave the cast of the series and join FOX’s “Beverly Hills, 90210” as Gina Kincaid. She returned to “GH” in 2002, but moved onto NBC’s “Las Vegas,” which also starred Josh Duhamel (ex-Leo, “All My Children”) and James Caan in 2003. The series was cancelled in early 2008 during the infamous Writer’s Guild of America strike.