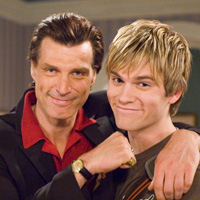 (SoapOperaNetwork.com) — “As The World Turns” is getting its resident bad boy back as Paolo Seganti returns to Oakdale in 2009 as Damian Grimaldi.

Last seen in 2006, after heated battles with Lily (then played by Martha Byrne) and Holden (Jon Hensley) over their abilities as parents when it came to raising their son Luke (played by Van Hansis, pictured), Damian left town after it was revealed he was out for his own and would do anything to get his hands on Luke’s inheritance. Subsequently, Luke disowned his father.

A first airdate has not been set.

Seganti originated the role of Damian Grimaldi in 1993. His television credits include guest-roles in such series as TNT’s “The Closer” and CBS’ “CSI: Miami.” He recently appeared in the short film “Bye Bye Sally,” which was written by former “World Turns” co-star Paul Leyden.

Discussion: Welcome Back to Oakdale, Damian!