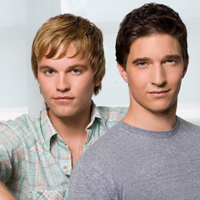 Henry isn’t pleased to learn that the only reason why Maddie is back in town is to try to start again with Casey. When she expresses how they both are different people now, Henry hesitantly agrees to give them a chance to try again. Bonnie tries to get Jade to come to Metro with her but Jade tells her she doesn’t want to be pushed into Derek’s life. Jade and Luke have a run in and when he leaves upset for her not accepting his apology, she follows after him only to run into Derek and Bonnie. Derek lets Jade know he doesn’t want to have anything to do with her, but she shoots back at him by telling him he wasn’t even on her mind.

Dusty admits to Meg that he still longs to have Johnny in his life; even admitting that he would have taken Craig up on his offer for joint custody. Josie heads to the hospital to see Paul and becomes deeply concerned when he reveals a vision to her, under the assumption that he’s ‘seeing’ Jennifer in front of him. When she tries to explain the vision to Dusty he disregards what she has to say until Meg reminds him t hat Paul’s visions have rarely been wrong. Meg and Dusty soon head over to the hospital where Paul tells him that he sees Johnny surrounded by a lion. After a call to the PI, Dusty once again comes up short. Meanwhile Lucy continues to stay hidden at the Lakeview with Johnny.

What to Watch: Flirting with Disaster
Lucinda and Brian get into an argument over New Year’s plans which causes her to push him away, telling him to go to Metro by himself. Maddie and Noah, who are also at Metro have a heart-to-heart, where she tells him about hearing Casey and Alison making out in her room at the Lakeview. Noah comforts her by taking her to Al’s unaware that Luke has seen them. Once again upset at their closeness, Luke gets drunk; Seeing this, Brian decides to follow him. After telling Brian to leave him alone, Luke grabs him and kisses him in a taunting manner. Noah witnesses it and assumes that Brian was the one that came on to Luke, punching him cold. Brian quickly covers when Lucinda sees him later all bruised and bloodied. Unfortunately for Luke, Noah soon learns that he was the one that put the moves on Brian and walks out on him.