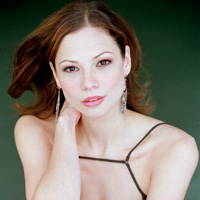 (SoapOperaNetwork.com) — Bianca’s back from Paris with a few surprises.

ABC confirms that both Tamara Braun and Eden Riegel have signed contracts with “All My Children,” but the lengths of those contracts have not been revealed.

Tamara Braun is joining the cast of “AMC” as Bianca Montgomery’s (Eden Riegel) girlfriend, Reese Williams, who is described as a “confident and successful architect.” Braun is best known for her work on “AMC’s” sister soap “General Hospital.” The Emmy-nominated actress played the second incarnation of Carly Corinthos from 2001 until 2005. Braun’s last role on daytime was at NBC’s “Days of Our Lives” where she played the troubled Ava Vitali for a six month period in 2008. On Reese’s upcoming storyline, Braun tells Soap In Depth, “where this is going, I don’t know that this storyline has ever been done in daytime.”

As previously reported by Soap Opera Network, Riegel is returning to “AMC,” as well, as the popular Bianca Montgomery. Riegel played Erica Kane’s (Susan Lucci) tortured youngest daughter from 2000 until February 2005. The actress was nominated for several Daytime Emmy’s in that time, and finally took home the award in 2005. This will be Riegel’s third … uhm, no actually seventh return to “AMC” since her 2005 exit. Riegel’s longest return started in October of 2006 when the actress initially signed on for a three month contract that extended to six; her last return was in December of 2007.

Braun’s Reese won’t show up until Thursday, October 30, although her girlfriend Bianca first airs on Friday, October 17, when her brother-in-law, Zach Slater (Thorsten Kaye), finds her buried under some rubble that the tornado, that’s due to hit Pine Valley during the week of October 13, leaves behind. Word is that, despite Reese’s delay, Bianca will not be returning home all alone – and we don’t mean with her sweet daughter, Miranda. Speaking of Miranda, Haley Evans will reclaim her role and is scheduled to start taping soon.

In non-related “AMC” casting news, Shannon Kane will be portraying Natalia, the young woman from Jesse’s past that SON previously reported about. The role is contract.