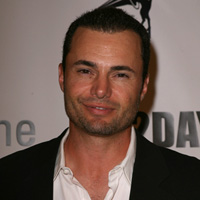 (SoapOperaNetwork.com) — Matthew Borlenghi is expected to shake things up next month on the NBC drama series “Days of our Lives,” when he joins the cast as the Mayor of Salem.

Beginning Thursday, September 18, look for Borlenghi to shock Salem citizens, as his character Mayor Marino, with news that…oh wait, I can’t tell you…yet! Just know that you’ll definitely be in for a surprise.

Borlenghi is best known for playing Brian Bodine, Hayley’s (Kelly Ripa) love interest, on ABC’s “All My Children, and Ziggy Deadmarsh on CBS’ “The Bold and the Beautiful.” This year the actor co-wrote the film “Jack Rio” with Sean Kanan (“The Bold and the Beautiful” and “General Hospital”) and the films Director/Producer, Gregori J. Martin. Released in June, the film was about a TV actor needing to find himself, but finding a serial killer in his way is not what he expected. His other credits include stints in Showtime’s “Dexter” and CBS’ “Without a Trace.”

Look for Roscoe Born to make a dramatic exit at the end of September as his character departs the “DAYS” canvas. His departure is said to be storyline dictated, according to sources.