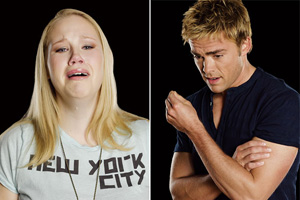 “Five Young Soap Stars to Watch” is an online feature currently on the website of New York Magazine, in which the mag profiles young stars from New York based soaps that they believe are ready for super-stardom. The magazine enlisted the aide of well-known soap journalists Connie Passalacqua Hayman, a longtime soap journalist and professor of journalism at Marymount Manhattan; Carolyn Hinsey, former editor of Soap Opera Weekly according to reports; Michael Logan, columnist TV Guide; Terry Morrow, TV critic for Knoxville News Sentinel; and Ed Martin, TV editor for JackMyers.com as judges.

On the Web: Five Young Soap Stars to Watch

While there, check out the magazines interview with “Guiding Light” Executive Producer, Ellen Wheeler (see story).