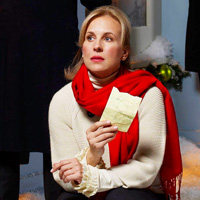 “This is a short visit,” Francis said in an interview with the The Associated Press on Friday. “It’s a mother-daughter story. Years ago when I started playing the character as a 14-year-old girl, it was a mother-daughter story, only I was the daughter. So it’s kinda cool this is full circle. It’s nice to come back for visits. ‘General Hospital’ is my home.”

Francis is referring to her storyline with on-screen daughter Lulu Spencer, played by Julie Berman since 2005. After being cured by a supposed miracle drug of Robin (Kimberly McCullough) and Patrick’s (Jason Thompson) in 2006, Laura returned to the catatonic state she had been in for years since Laura couldn’t deal with the reality of killing her father.

Lulu is expected to have a breakdown in the coming weeks due to the recent death of former love, Logan Hayes (Josh Duhon), who she killed on Monday’s episode of the soap. Lulu was defending herself against Logan after he attacked her enemy/co-worker, Maxie Jones (Kirsten Storms) in the Crimson offices across the street. She will go on the run with Johnny (Brandon Barash) in order to avoid police the week of July 21.

“I would stay on, but ‘General Hospital’ honestly doesn’t seem to want that relationship with this character at the moment,” said Francis. “They want little short doses during sweeps periods. It’s not entirely up to me. I’m thrilled and delighted my audience stands behind me. If they didn’t, you can be sure I wouldn’t get to come back for these visits.”

Francis hit it big in the 1980’s with her on-screen romance with Luke Spencer, played by Anthony Geary. The couples marriage on the ABC soap in 1981 remains the most watched televised event in daytime history with 30 million viewers. Elizabeth Taylor guest-starred in the episode as villainess Helena Cassadine.