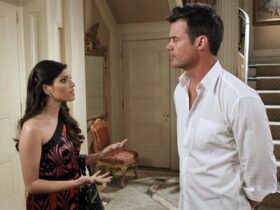 Angie tries to get through to Randi. Jake confronts Frankie on his feelings for Randi. A drunken Colby manages to get in the way of both Cassandra and Dre, and Ren and Corrina’s growing closeness. Carmen begins working for Adam, who is certain he’s going to come to regret hiring her. Dre and Cassandra set out to drive Colby home from the lodge.

Adam would like nothing more than to comfort Krystal over the situation with Babe, but Krystal refuses to let her ex get close. Adam assures Krystal that Babe is a survivor. Krystal finally allows Adam to comfort her. Adam and Krystal kiss. Krystal guilt is apparent as Tad tells her how important she is to him.

Erica and Samuel open up to each other while locked inside the prison cell. Samuel tells Erica about the day his wife died. Erica and Samuel share a kiss just before they’re freed. Erica is amused by Samuel’s bashfulness about their kiss. Samuel makes it clear that he has feelings for Erica as the two enjoy flirting with each other.

Kendall, Greenlee and Amanda realize Babe is missing after the lights come back on at Fusion. Zach informs the women that Richie is on the loose. Jesse quickly takes charge of the search for Babe after being sworn in as Chief of Police. Richie heads to a cabin in the woods with Babe locked in the trunk of his car. Richie’s threatens to expose every single one of Annie’s misdeeds unless she meets him at the cabin to hand him over more cash. Zach regrets not killing Richie when he had the chance. Kendall and Greenlee decide to take matters into their own hands. Kendall finds a picture of Babe and Richie at a cabin and feels certain that is where Richie took Babe. Babe plays along with an increasingly unhinged Richie. Zach, Aidan and JR head out to try and track down Babe and Richie after managing to trace a call JR made. Babe’s escape attempt makes a bad situation even worse. Greenlee and Kendall arrive at the cabin and brace themselves to rescue Babe. Greenlee, Kendall and Babe manage to overpower Richie and tie him up. A hidden Annie continues to watch the situation unfold. Greenlee, Babe and Kendall each give Richie a piece of their mind at knife point. The women leave Richie alone in the cabin to call for help. Annie approaches her brother with the knife … and frees him. Richie and Annie sneak out of the cabin unseen. Jesse is perplexed when he doesn’t find Annie at home. Zach takes off after Richie after he, Kendall, Aidan, Greenlee, JR and Babe return to the cabin and discover Richie is gone.

In this episode, that originally aired on February 18, 2008, Jesse and Angie reunite at the train station and then go to a cabin where Jesse explains that he really is alive. The Campbell’s “Go Red” fashion show takes place. Annie is disturbed at the connection Ryan has with Greenlee and Kendall. Kendall denies to Aidan that she is pregnant. Erica is arrested.

Monday: Jesse calls Ryan and Annie with alarming news. Kendall fears Zach might have gone too far. Dre surprises Cassandra with a kiss.

Tuesday: Zach grows suspicious. Aidan is determined to win Greenlee back. Colby, Dre and Cassandra get some disturbing news.

Thursday: Greenlee and Aidan start to get back on track. Erica shares an emotional visit with Kendall. Carmen urges Jack to go after Erica.

Friday: Greenlee comes to terms with her feelings for Aidan and Ryan. Jesse pays a visit to Annie. Frankie defends Randi to Angie.