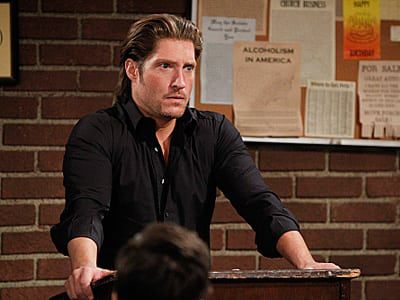 Daytime veteran actor Sean Kanan began his daytime career in 1993 as AJ Quartermaine on "General Hospital;" a role the handsome 44-year old actor played until 1997. After a short stint on NBC's "Sunset Beach," in 2000 the actor landed on the most popular American daytime drama in the world which is CBS' "The Bold and the Beautiful." His bad boy character, Deacon Sharpe, memorably began an affair with and impregnated "B&B's" top siren Brooke Logan (Katherine Kelly Lang) while married to her daughter Bridget (then played by 3-time Daytime Emmy winner Jennifer Finnigan). His "B&B" stint ended in 2005, but Kanan has continued in the role on America's number one daytime drama CBS' "The Young and the Restless" since 2009. In Genoa City, Deacon's carried on affairs with some of the most prominent women including queen bee Nikki Newman (Melody Thomas Scott). Soap Opera Network recently caught up with the actor for an interview pertaining to his lifestyle book "The Modern Gentleman: Cooking and Entertaining with Sean Kanan," which was released on September 13. Kanan also discussed his career and his thoughts on the current state of daytime television.