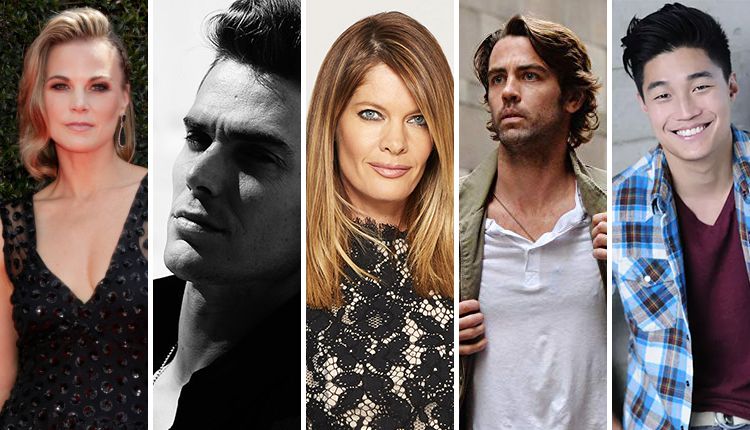 (SoapOperaNetwork.com) — Daytime veteran actor Sean Kanan began his daytime career in 1993 as AJ Quartermaine on “General Hospital;” a role the handsome 44-year old actor played until 1997. After a short stint on NBC’s “Sunset Beach,” in 2000 the actor landed on the most popular American daytime drama in the world which is CBS’ “The Bold and the Beautiful.” His bad boy character, Deacon Sharpe, memorably began an affair with and impregnated “B&B’s” top siren Brooke Logan (Katherine Kelly Lang) while married to her daughter Bridget (then played by 3-time Daytime Emmy winner Jennifer Finnigan). His “B&B” stint ended in 2005, but Kanan has continued in the role on America’s number one daytime drama CBS’ “The Young and the Restless” since 2009. In Genoa City, Deacon’s carried on affairs with some of the most prominent women including queen bee Nikki Newman (Melody Thomas Scott). Soap Opera Network recently caught up with the actor for an interview pertaining to his lifestyle book “The Modern Gentleman: Cooking and Entertaining with Sean Kanan,” which was released on September 13. Kanan also discussed his career and his thoughts on the current state of daytime television.

Can you summarize the main theme and lessons of “The Modern Gentleman: Cooking and Entertaining with Sean Kanan”?

“The Modern Gentleman: Cooking and Entertaining with Sean Kanan” is a hybrid combining the best parts of a “how to” cook book and a self help/pop psychology guide for men to become better men. I teach you how to use food as a metaphor to connect with other people. I also decipher what it means to be a gentleman in today’s confusing landscape of mixed social signals. Many woman lament that they always fall for the bad boys. I will show you how to exude the “best” qualities of a bad boy all the while remaining a true modern gentleman. The book also offers woman a front row seat in the theater of the male psyche. This ain’t your mama’s cookbook.

What inspired you to write “The Modern Gentleman”?

I love to entertain and cook for my friends. For years everyone has told me that I should open a restaurant. Writing a book seemed like a better way to reach and affect more people. At the end of the day my most basic desire is to affect a positive change in as many people as possible. My other inspiration for the book centered around the frustration I see among men who have been largely depicted by Hollywood and Madison Avenue as a group of bumbling, overgrown and inept children. Obviously this is not reality. Men have simply never had a mentor, someone to teach them all of the things that women wish they knew. I am also very involved with the Anti Defamation League (ADL). I speak out frequently about bullying and cyberbullying. As a young boy I was bullied. Later I played iconic bully, Mike Barnes, Karate’s bad boy in the Karate Kid III. I was searching for a nexus between my work with the ADL and the information in my book. My girlfriend, Michele, pointed out that young boys taught to be gentleman do not generally grow up to become bullies. On the contrary, they evolve into well adjusted and tolerant men who view all women as someone’s daughter or sister. Consequently they treat them with respect.

On the subject of your daytime career, you’ve starred on “General Hospital” as AJ Quartermaine, and on “The Bold and the Beautiful” and “The Young and the Restless” as Deacon Sharpe. Can you give us some of your fondest memories from each show both as an actor and for each character?

My early days on “GH” were bitter sweet. I was involved in some very socially poignant story lines as well as a great many emotionally challenging scenes. I was honored to have this opportunity professionally. I was also dealing with some very serious inner-personal challenges that made my tenure in Port Charles very, very difficult at times. Ultimately albeit years later those days served to make me the man I am today. My early days playing Deacon Sharpe were really magical. They were so fulfilling on many different levels. I had finally found “The Part”. This is the role every actor prays for that will draw the attention of the outside world and speak to his or her soul. Deacon Sharpe was in those days my, “The Part”. I was extremely connected to my fellow actors, producers and the fantastic crew which supported me so well. I miss those days but I gotta say I am also loving these days.

With all the cancellations and potential online resurrections, what are your thoughts and feelings on the current state of daytime? What are your hopes for the future of daytime?

It all boils down to ratings and production costs. If a show sustains the ratings that allow the network to sell commercial time for a profit then that show has a good shot of remaining on the air. I am fortunate to be a part of the number one rated, daytime drama. My heart goes out to all of my fellow actors and the crew and production members who have lost their jobs. There is a very human face on these cancellations. Concurrently I really dislike when I hear people say “I hate that character. They should fire so and so.” That so and so has a family to feed and children to raise. Careless and insensitive comments like this result in human beings losing their livelihood. Words become actions. I talk about this in my book. Remaining accountable for the things we say is the mark of a mature adult and the hallmark of a modern gentleman.

You competed in the third season of the Italian version of “Dancing with the Stars.” Describe the experience. Are you ready for the American version?

My participation in “Ballando con le Stelle” was a life-changing experience. I lived in a foreign country under the best circumstances. I learned to dance with the best dancers in the world and, oh, by the way, I was living in Rome!! I drew a lot of inspiration from my book from my days in Italy. I would love the opportunity to dust of my dance shoes and join the American show.

Kanan is currently doing book signings for “The Modern Gentleman: Cooking and Entertaining with Sean Kanan.” Follow the actor at his official site to find out the latest locations, dates and times for these signings. You can purchase this thoughtful advice and recipe book at book stores such as Barnes & Nobles and online at Amazon.com.

A special thank you goes out to both Kanan, of course, for taking some to share his thoughts with our SON family – and to Turk Entertainment for setting up this interview between the actor and SON.

Update (10:00 PM EST): The actor has just added three more dates for book signings for “The Modern Gentleman: Cooking and Entertaining with Sean Kanan.” The book that just sold out at Amazon.com (it has been re-ordered) will be available at the signings and cooking demonstrations this coming weekend. Sean’s book is also coming to Bed, Bath & Beyond locations soon. The locations, dates and times for the upcoming appearances are as follows…