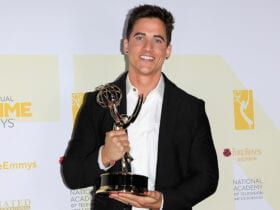 Although he has yet to make his official “Days of our Lives” debut on-air as Johnny DiMera, daytime newcomer Carson Boatman is already making headlines with news that he recently wed longtime girlfriend and model Julana Dizon.

Taking place in Des Moines, Iowa on Friday, July 23, near where he grew up, Boatman told PEOPLE magazine that the couple is “ecstatic” and “We couldn’t be happier. It’s been a long year and so we’re excited to kind of get it behind us and top it off with us tying the knot.”

The couple met in 2016 in Los Angeles courtesy of a mutual gym trainer who set them up. In July 2020, the singer and actor used an original song he wrote that ended with him asking Dizon to marry him.

“I’m just so excited to be like, ‘This is my husband,’” Dizon said to PEOPLE. “My husband! The thing I’ve looked forward to my whole life is one day getting married and then eventually later down the line start a family. Literally, anything in life that comes after getting married, I’m just excited to do with him.”

A series of clips from the wedding, including the couple’s first dance, was shared on Boatman’s Instagram stories. You can see the beautiful wedding pics here.

Boatman makes his on-air debut on “DAYS” on Wednesday, August 18. “I absolutely could not be more grateful, humbled, and excited to begin this new journey and to bring Johnny to life on screen!” said the actor in announcing his being cast on the soap. “Congrats, son,” commented TV dad Dan Feuerriegel (EJ DiMera).