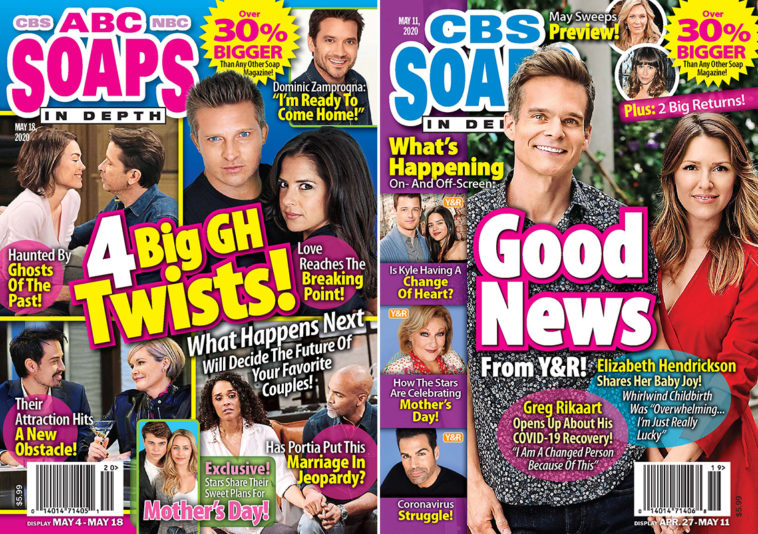 On April 23, it was announced by editor in chief Dawn Owens that both magazines would cease publication, effective immediately. “I would like to thank you, dear readers of ABC Soaps In Depth and CBS Soaps In Depth, for the years of loyalty and support that you’ve shown our magazines, as the print editions of the magazines will no longer be published,” said Owens in a statement at the time. “I would also like to thank our amazing and talented team for giving their all to put out these magazines week after week. The staff has taken great pride in providing positive, uplifting coverage of the soap world for 24 years. At our hearts, we are all fans of the genre. We laughed, cried, and sometimes screamed right along with you at what was happening on our beloved soaps.”

The final issue of the magazine went on sale on Monday, May 4 with its ABC edition. It includes an interview with Maurice Benard (Sonny, “General Hospital”), a Mother’s Day photospread featuring “GH” stars, and a tour of Amsterdam courtesy of the legendary Anthony Geary (ex-Luke, “GH”). The issue will be displayed until May 18 at your local grocery store or supermarket. The final CBS edition went on sale on Monday, April 27, and will be displayed until May 11. It features real-life stories on “The Young and the Restless'” Greg Rikaart (Kevin) and Elizabeth Hendrickson (Chloe) — Rikaart on COVID-19 and Hendrickson on her newborn baby. Additionally, the magazine presents its Mother’s Day photospread featuring cast members from “The Bold and the Beautiful” and “Y&R,” and a fond farewell to “All My Children” actor John Callahan (ex-Edmund) who died in late March from a massive stroke.

If you are able and can do it safely, make sure to get your very own copy of the final issues of Soaps In Depth, on newsstands now. You won’t regret it.

Those looking for subscription support should visit soapsindepth.com.

Soaps In Depth launched in 1997 with three distinct network editions tailored to the daytime dramas airing on broadcast television at the time: