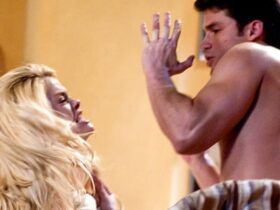 She’s Back! Tess Lives On

While only appearing in a handful of episodes of CBS’ “The Young and the Restless” in 2013 as Father Martin, actor Miles Gaston Villanueva is set to return to the soap next month in the newly created role of Luca Santori, a charming and mysterious Spanish prince from a wealthy family. The role is said to be recurring.

“YES. ‘Tis TRUE! Just 2 years after my stint as Father Martin, The Royal YOUNG AND THE RESTLESS Family has brought me back onto the show for a Major Recurring spot this fall. The character is the charming and mysterious Luca Santori, a Spanish prince from a wealthy family,” wrote Villanueva on his Instagram page. “Words cannot describe how thrilled and grateful I am for the unique and special opportunity of being invited back onto the show – it rarely happens, I am told – and by such a generous, hardworking, kind, and loving team of producers, writers, designers, cameramen, stage managers, directors, and actors.”

Elaborating on how things came to be, Villaneva added, “During my auditions for the role, including my callback with all casting directors, producers, head writer, and leaders of CBS Daytime, including Executive VP of CBS Daytime, Angelica McDaniel, present; during my 1st costume fitting with the delightful Scott Burkhart; during my unexpected, yet unbelievably warm and generous “Welcome Back” in the offices of one of my greatest champions, Jill Farren Phelps (executive producer), the warm and welcoming Jimmy Freeman (associate producer), and the brilliant Matt Kane (publicist), along with a slew of others; during my 1st day of shooting (4 days after booking the role!), and also my 2nd day of shooting (today!); and, truly, during every moment in between, I have experienced nothing but the most genuine welcome, admirable professionalism, incredible support, relentless encouragement, and constant enthusiasm, smiles, and joy from all the people in this #YR Family – including, of course, the loyal fans of the show.

Last week was a gift beyond words, thanks to these people – a string of days I will never forget. And the fun only exponentiates as work with this family continues… This opportunity is unlike any other before it, and for many reasons, which makes me so grateful. The amount of love and respect and appreciation, in word and deed, that I have received from these creators and leaders – from every person, at every rank – has left me speechless and feeling so fortunate and special. I have been gushing, from the inside out, since last Monday, when my manager and agent called with the news. I am, almost a week later, still over the moon.”