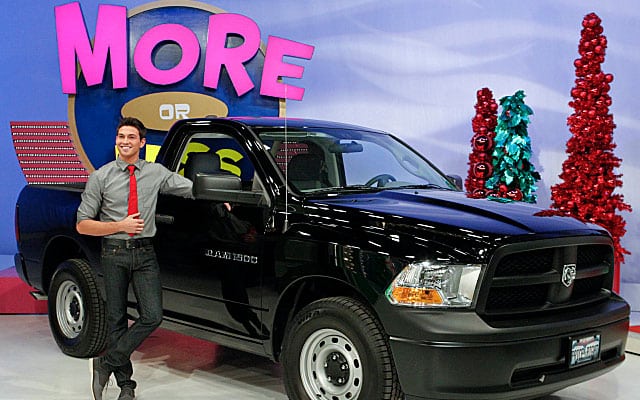 It’s raining men at “The Price Is Right,” which has been in the thick of a national male model search of manly proportions for the past couple of weeks. And seeing as how the game show not only helped launch the career of “Days of our Lives’” Robert Scott Wilson (Ben Rogers; ex-Pete Cortlandt, “All My Children”) but also decided to include “The Young and the Restless’” Melissa Ordway (Abby Newman) and Daniel Goddard (Cane Ashby) in this year’s search (which Soap Opera Network was the first to reveal), we decided to have executive producer Mike Richards come on down and give us the full scoop!

This year’s exciting male model search may not be the first the show has launched, but it is definitely the largest, having been nation wide, the inspiration for a web series and will be an upcoming topic on CBS’ “The Talk.” “The production team on ‘The Price Is Right’ is phenomenal; we never stop thinking of new things to do, how we can expand the brand and get more people to watch the show and be a part of it,” Richards explains of how the idea for a second model search came about. “Our mandate internally was, ‘We just have to make it bigger and better,’ and that’s why we have Melissa and Daniel, who are already in our universe, here. That’s why… [former Miss USA] Shana Moaklar is a judge, that’s why the winners are going to be announced on ‘The Talk.’ It’s a lot bigger this time.”

In the midst of all the excitement, fans of Robert Scott Wilson — the first ever male model on the show — are wondering if perhaps the show will strike gold a second time. Richards is hopeful but points out that it will be nearly impossible to replicate exactly what Wilson brought to the show. “He’s just that good,” the exec praises, adding: “Whenever you’re the first of anything, you’re always going to be the tough act to follow. Do we want someone that is as natural and charismatic and good looking as Rob on our show? Yes. Do we want another Rob? Probably not. Because we want someone different. What was so great about Rob was that he was Rob. So we want those baseline things, but we want someone completely different. And what’s great is, America votes and we give them options, but [in the end], they’ll decide what they want.”

That being said, Richards — along with Goddard, Ordway, Moaklar, Wilson and others — have been weeding through the hopefuls so that the top three out of thousands can be presented to America. And through that process, the EP has noticed his own favorites. “What’s interesting about this, and it happened last time too, you have people you thought would be great that ended up not being great. And then you have people that are a little weak, and to be honest, and Rob knows this, Rob was not my favorite going through much of the process,” he reveals. “The producers and I went back and forth about having him on, and he knows this. And I called him out on it on the show. I said, ‘Hey, you’re too calm, you’re too mellow.’ So now, we definitely have people that we like, but in each of our challenges, strengths and weaknesses have been exposed, and so we’re kind of challenge to challenge. We do go, ‘Ok, here’s what we think is going to happen,’ and then we do the challenge, and we go, ‘Oh no.’ Because he was great, and who knew he was going to be that good? We have an 18-year-old, Jarrett, who submitted through the Internet, and I thought, ‘Oh, he’ll make it one round; he’s young and charismatic,’ and here he is in the final five, and this guy just keeps better and better and more confident, and I’m telling you, he’s getting better looking, too. He’s evolving into the role, and ultimately, that’s what Rob did. Rob evolved into what you see now, because he’s a pro.”

Soap stars in general tend to be pros, and that’s why Richards and the ‘Price Is Right’ team decided to include “Y&R’s” Ordway and Goddard into the action. “If you watch Daniel Goddard [when he guest stars on ‘Price’], he’s a ham, he’s good looking, he’s funny, he lights up every room he’s in. He can’t help it. If you look at Melissa Ordway, she’s good looking, a ham, lights up every room she’s in, makes every scene better, whether it’s on the soap or on ‘The Price Is Right.’ So that’s what we’re looking for: People that can really elevate it.”

As for whether or not Richards has seen a direct correlation between increased ratings and soap opera actor appearances on the game show, he says the “Price” team doesn’t look at it that way. “We don’t track things that closely to where we go, ‘Oh, there’s a big bump,’” he explains. “My belief about daytime is that when you do things well consistently, that’s what draws people in. In primetime, you stunt someone, and it can change the number, because there’s promotion and advertisement. But on these shows, it’s harder to do that. So for us, it’s about consistently making it better, consistently having the soap actors on, consistently having them great on the show. And so it’s more about over time repetition and being really, really good than it is about one big, ‘Well, we had Daniel Goddard here today.’ Now, that being said, he tweets about it, the soaps tweet about it, CBS Daytime tweets about it, so people are aware of it. And then there’s that, ‘Oh my gosh, that’s my favorite actor, I didn’t know he was going to be on today. That’s Melissa Ordway, holy cow, I love her.’ Or, ‘There’s Hunter [King, Summer Newman], a phenomenon who won an Emmy this year.’ That’s my theory, anyway. And that’s why those numbers don’t pop, because it’s more like, ‘Oh, that was great. I want to watch again tomorrow.’ And that’s why you see a steady increase, rather than [a temporary boost].”

As for the future, Richards says he’s very much looking forward to the next chapter of “The Price Is Right” and the addition of the show’s next male model (who will win a week-long modeling contract for the week of Monday, December 15). But he also reveals that including male models on the show in the first place was a nerve-wracking decision. “It was a big change that I was really nervous about,” he admits. “But there are a couple of benefits: One, we have a fan base that is largely female, and it gives them the guy that’s running around on the jet skis and having fun… and the thing is, it gives us a place to go. The more varied talent you have on an ensemble cast, which ‘The Price Is Right’ is, the better the entertainment. And I’d rather see [a male model] on a motorcycle than one of our female models. Our female models do an amazing job, but it just makes more sense. So there are a lot of benefits. And honestly, bringing someone new in like Rob, he elevated everybody’s game: My game, [host] Drew [Carey’s] game, [announcer] George [Gray’s] game, the director’s game, the models’ game, everybody’s game goes up, because they went, ‘Oh, here’s this new guy, and he’s really naturally good at this.’”

And now, the challenge will fall to the show’s next male model. “And then, it will be up to America, so don’t screw it up, America!” the exec teases with a laugh. “We want them to pick the right guy that they love. And by the way, they nailed it with Rob Wilson. The other guys who entered were good, but they chose Rob, and they got it right.”

Be sure to tune into the Monday, December 1 episode of “The Talk” to see the final three male model contestants, and then cast your vote for your favorite at www.priceisright.com!