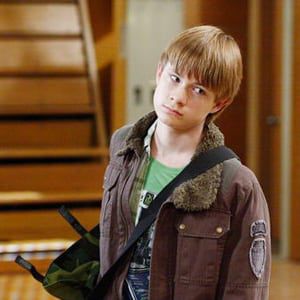 Liam told Hope he was choosing Steffy over her. He anguished that the man she sees when she looks at him wouldn’t walk away from a child conceived in love.

Devastated, Hope ran away. Liam chased after her outside and told her that they should’ve been married, but some things can’t be undone. Hope reprimanded that while Steffy loves him, no one will ever love him the way she does. Liam kissed her and she left.

Liam returned home and told Taylor, Brooke and Steffy that Hope was gone. Disappointed, Brooke left. Before leaving as well, Taylor told Liam he made the right choice. Liam stroked Steffy’s face and asked her if she was happy. “We’re going to have a baby!” she replied excitedly. He put his hands on her belly. Steffy told him that he doesn’t have to stay with her and that if he wants Hope, he should go be with her. Liam said he belongs with her and the baby. Steffy needed him to be sure. He hastily said he was and hugged her. They joked about potential pregnancy cravings and ordered a pizza with anchovies. While discussing baby names, Steffy joked that if it’s a boy he could be another Bill. She suggested the name ‘Isis’ for a girl. “She’d be fearless” Steffy said. “Just like her mom” Liam replied.

Brooke found Hope crying in her car and embraced her. Hope told her that Liam chose Steffy and that there really was no choice for him. Brooke thinks he can be in the childs life and be with Hope as well. Hope said he won’t turn his back on his child…or Steffy. They debated if this was what Liam really wanted. Hope said it didn’t matter. Brooke related to Hope and told her she knew the pain she was feeling. Hope appreciated her mother’s support. At home, Hope started to put make-up on her face, but began crying.

At Dayzee’s, Rick invited himself to join Maya on his break. Maya talked about herself. She told him she was talented and popular in high school, but competition was tough once she settled in L.A. Rick said he’d hire her in a minute. He asked her if she’ll ever come back again. Maya said it was possible.

Bill was thinking about Brooke in his office. Taylor stopped by. “Were going to be Grandparents!” she exclaimed. Bill was excited and said it was the best news since Katie came home. Taylor filled Bill in on Brooke’s wedding scheme. Bill felt bad for Hope getting shot down twice in one day. They talked about babies and he thanked “Grandma” for the news. Taylor left.

Over at the Forrester fold, Eric stared at a picture of Taylor on his phone.

Taylor went to visit Thomas in his office and commented on his new beard. Then she told him that she and Bill have something in common – they’re going to be Grandparents! “You’re sister is pregnant.” she told him with glee. Thomas was surprised. Taylor assured Thomas that Steffy was beginning her life with Liam and that it’s what Liam wants. Taylor got a call from Eric, who invited her to dinner. She accepted. Thomas wondered if the special man on the other line was someone he knew. Taylor told him it was Eric. Thomas was happy to hear that and told her he had the perfect dress for her to wear tonight!

Bill went to see Brooke at the cabin and asked if there was anything he could do. He stroked her cheek and told her he knows she’s hurting for Hope. Brooke said Liam was ready to marry Hope today and that she’ll always be in his heart – baby or no baby. Brooke wanted Bill to ask Liam if he was going to marry Hope. “I need to know,” she said. Bill said Liam’s made his decision and it won’t help anyone – especially her – to open that back up. He suggested Brooke turn her attention back to Forrester and advised her to ask Eric about running it as co-CEO with him. Brooke wasn’t sure. Bill tried to build up her confidence and told her to go to Eric…tonight!

Steffy started the process of having her loft put on the market. Liam reassured her that he doesn’t feel trapped and is where he wants to be. Bill comes storming through the door on a mini dirt bike with balloons and baby gifts on his back. Steffy and Liam laughed at his excitement. Bill hugged them and expressed his thrill about the upcoming generation of Spencer’s. Bill told Liam that they now have a new bond – the first hands-on dads in their family. He hugged both Steffy & Liam after telling them they’d be great parents.

Later, Thomas visited Steffy and Liam. Thomas welcomed Liam to the family. Liam promised he was committed to being a father. Liam went to do some work. Steffy mocked Thomas about becoming an uncle. They talked about their mother dating Eric. Thomas said he thinks it’s great for both of them. Steffy agreed and added that Brooke won’t like it – an added bonus.

Eric set up a romantic evening with candles and music. He smiled at Stephanie’s portrait. Taylor arrived and Eric complimented her ‘Thomas Forrester original.’ They hugged. They discussed Stephanie. Eric said she’d want him to move on with his life and who better to do it with than Taylor. Taylor said this was the perfect ending to her day. They slow danced and talked about their attraction to each other. Taylor told him she hasn’t felt this way in a long time. Eric took Taylor upstairs where a surprise awaited. He showed her a new design to try on. Meanwhile, downstairs, Brooke let herself into the house and noticed the romantic dinner setup. Upstairs, Taylor was now wearing a beautiful green nightgown. She kissed Eric. “Eric? Are you in there?” they suddenly heard Brooke say through the door.

Eric rushed to the door and asked what she wanted. Brooke wondered if he was ill and then assumed he was hiding Donna. She then spotted Taylor through the door and couldn’t believe it. She scolded them for doing this after Stephanie just died. Eric said he will always miss Stephanie, but she’d want him to move on. Brooke accused Taylor of trying to get power at Forrester. Taylor denied it. Eric told Brooke that he loved Taylor. Taylor told Brooke that this was happening whether she liked it or not. Brooke darted off downstairs and yelled that it was all wrong. Taylor said they were following their hearts. Brooke said Stephanie wouldn’t want this and tried to kick Taylor out. Eric told Brooke that she was the one leaving…now. Brooke’s eyes welled up with tears. After she left, Eric told Taylor there’s a new Forrester matriarch. “It’s you,” he said. They kissed.

Oliver found Hope wiping her tears at work. He said he heard what happened from Madison. He told her he wanted to tell her a story. He started telling ‘their’ story, and admitted that one night he was out really late and did something he thought would win her back. He showed her a tattoo on his ankle – the Chinese symbol for Hope! Hope laughed. Oliver said he planned to get it removed but something always came up – maybe it was a sign? He said he still cared for her. Hope hugged him.

IT HAPPENS NEXT WEEK…