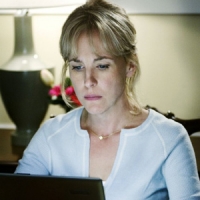 Victoria received a phone call from Rafe letting her know that Phyllis received legal vistations rights. While on the phone, Phyllis arrived, wanting to see her. She questioned if Daniel was there and Victoria laughed at the fact that her son didn't want to have much to do with his own mother. Phyllis said that he'd come around when he realized she was doing the right thing. When Phyllis asked to see Lucy, Victoria told her she could: once the social worker arrived.

Billy was on the phone talking regarding keeping his family matters out of the magazine, especially if anything happened to be spread by Phyllis. When he ended his phone call, Victor approached him on the matter. He commented how selfish Phyllis was and that he wanted to make sure that his family was taken care of. He offered Billy to use his legal team if he needed to. Unfortunately, Victor's offer was tarnished when he tossed out an insult at Billy.

Neil, Sophia and Malcolm realize that due to the letter Cane had written, he was telling Lily of his family ties. They soon start to realize that Colin purposely used Cane's twin, Caleb as a way to drive Lily crazy. Neil suddenly remembers that Colin has the twins. He calls him and insist that he calls him back, giving him a story about Charlie having an ear infection. Meanwhile, Jill watches Colin and the twins and gets the call from Neil. She tells him where she is, and they begin to head out. Off the phone, Jill approached a startled Colin, demanding to know what is going on. When she tried to assert that she would be taking the twins back to the house, he balked. At the moment Cane arrived, causing Jill to faint. Colin, despite what happened, still wanted to follow through with their plans on leaving. Upstairs in the estate, a angry Genevieve snapped, determined not to let her plans go up in smoke.

At the mental facility, Daniel continued to reassure Lily about her doing the right thing. They talked on hs decisions of letting Billy and Victoria have Lucy, despite Phyllis's feelings. When he received a phone call from Phyllis, he chose to ignore it. Lily told him that he should talk to her; but he said she brought it on herself. Just then, Malcolm and Sofia arrived to share the news about Cane and his family, giving Lily the letter. Lily was stunned to learn that Cane had a twin brother and a sister, and more-so, that Colin was his father. Malcolm told her that Neil was on his way to stop them from taking the twins. Lily frantically wanted to know where they were and when Malcolm told her, she and Daniel hurried out. Malcolm and Sofia were on their way to go too, but Sofia suddenly got a cramp, causing them to stay put.

Billy and Victoria were at Crimson Lights with Reed, who asked why Phyllis was with Lucy. They tried to dance around the subject, while Victor, who was with them, slipped out and made his way over to their house. When he knocked on the door, Phyllis assumed that it was Daniel with a change of heart. She opened the door and saw Victor on the other end. She asked if he was there to see Victoria but he said pointedly said he was there to see his granddaughter. making it clear to Phyllis that she had a fight on her hands.

At the estate, Colin and 'Caleb' were set to put the twins in the van when Jill came to. She discovered that Colin was merely using her to get the twins out of Genoa City. When he told her that he wasn't going to let anything get his way, she took off in hopes of finding someone to stop him. 'Caleb' put the twins in the van and were set to go when Neil arrived and told them both that they weren't going anywhere with his grandchildren. Colin said he was leaving and there was nothing Neil could do anything about it; after all, with 'Caleb', Neil was outnumbered. Quick as flash, 'Caleb' told Colin that he was wrong and said that he was the one that was outnumbered, revealing that he was really Cane. Colin was slightly shocked and when his henchman arrived, he told him to take care of things. Neil was doubtful at what Cane was telling him, but realized that he was being honest in who he was. At that moment, music from the estate was playing and Colin realized that Genevieve was there. He took off to go find her, while Neil chased him. Cane got the upperhand momentarily, until the henchman pulled his gun on him.

Victor waited until the social worker and Lucy were out of sight to talk to Phyllis. She told him that since Lucy was fast asleep he could go. Victor said he would have many more visits with his granddaughter. He said that the social worker was merely there to keep an eye on her; but she said she as there for him as well, bringing up how his working with Patty Williams caused her daughter to nearly die. He corrected Phyllis and told her that nobody knew what Patty was capable of, however, everyone in Genoa City knew just how dangers Daisy was. He questioned how she could let someone that nearly killed her son back into that little baby's life. Victoria and Billy return back home and are surprised to see Victor there. When the social worker comes back down, Phyllis whined that she needed to have another visit, since the one she had was interrupted. Once she was gone, Phyllis said she wasn't backing down from getting what she wanted: Victor challenged that he wasn't either.

While Neil was chasing after Colin, who was in the house to see Genevieve's recreation of what he'd done to Samantha, he ran into Jill. Neil told him what was doing on and Jill was unable to believe at first the fact that Cane was very much alive. Meanwhile, Cane and the henchman got into a fight, causing his gun to fly out of his hands. It fired off a round, hitting the gas tank under the van. While they were scuffling, Genevieve cornered Colin outside on the balcony. There she antagonized him for how he managed to kill off his entirle family. As the two argued, down below, Lily, Daniel, Jill and Neil watched on, wondering who Colin was talking to. As things got heated, Genevieve shoved Colin, who tumbled over the balcony. Gripping on for dear life, Colin begged for Genevieve to save him.