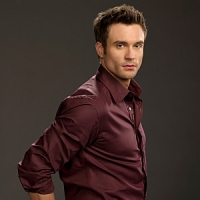 Malcolm went to the mental facility to see Lily. She told him that she was doing well since her therapy session that day When he spotted the photographs of Charlie and Mattie, she shared that Colin took them while he and Jill were with the twins at the zoo. The two changed the subject when Lily asked him about Sofia. He shared that she was doing fine, and that he couldn’t wait to be a father. He commented that he didn’t care if they had a boy or a girl, just as long as it was in good health. Lily asked Malcolm to do a favor for her: she needed a few items from her home.

At the estate, Genevieve called Cane to double check to make sure that Colin would be arriving on the airstrip. Cane, who was at the park awaiting his father’s arrival shared that he was positive that he would be doing things as planned. Genevieve continued to instruct Cane to keep on task the way they had talked about. When she ended her phone call, she took an urn out of a velvet box. The urn was that of Samantha. She vowed that she would make sure that Samantha’s death was avenged. Meanwhile, Colin met ‘Caleb’ at the park and gave him the address of where he and the twins would be once they were with him. During their conversation, Jill called to remind him that they had dinner plans together. Colin apologized and said he’d be right there.

Neil was with the twins at Crimson Lights, when Daniel showed up, watching the three of them. When he was spotted, Daniel was asked by Neil to have a seat so they could talk. Colin, who was headed to meet Jill at Gloworm for dinner, stopped to talk to Neil and asked him if he and Jill could have the twins for the night, claiming that with Chance gone, it might be comforting to Jill. Neil at first declined but with Colin’s persistance, gave in to the idea. When Colin left, Neil told Daniel about what was doing on with Lily. Daniel felt bad for not coming to Neil with the information about Lily seeing Cane. Neil, in turn, told him that Sofia and Malcolm are under the impression that Lily is in the facility due to depression and didn’t want them to learn the true nature of her checking herself in. Sofia arrived and told Daniel that Lily was asking about him. Daniel excused himself to go.

‘Caleb’ was impressed by how easy it was for Colin to convince Neil to have the twins. Colin commented that patience was the key. He told Caleb not to be late in meeting him. He then left him and showed up at Gloworm. When he met Jill, he told her that he had to leave town for a personal matter and that he couldn’t have dinner as they had planned. Jill wanted to go with him but he told her that it wouldn’t be necessary. He started to compliment on how wonderful she was as a wife and kissed her good-bye.

Sofia shared her frustrations about Katherine with Neil, letting him know about her suspending her. He advised her to try to work with Katherine, but also assured her that he’d talk on her behalf. Malcolm arrived and told them that Lily asked for some personal belongings. Sofial departed with Malcolm to get the items.

Daniel arrived to see Lily. When he walked into her room, Lily spotted Cane standing outside and started to freak out. Daniel reassured his ex that Cane may have came to mind out of her thoughts about him. Giving her a hug, he told her that he believed she was making progress. He shared the news about Billy and Victoria getting custody of Lucy.

Cane went back to the estate and Genevieve questioned why he was late. He admitted that he was at the mental facility to see Lily. When she becomes upset by his doing so, he lets her know that Lily didn’t see him at all there. He worried on her reaction when everything came out in the open. Genevieve assured him that once everything was accomplished, he’d be back to his life with his family. In the meantime, Colin showed up at the coffee house to meet Neil. As he as getting the twins, Jill, who was on her way there, spotted him, and assumed that he had a change of plans and was going to head home so both of them could spend time with the children.

Unaware that he is being followed by Jill, Colin arrives at the estate and headed to the airstrip. From the windows of the estate, Genevieve and Cane watched. Genevieve told Cane to head out to meet up with Colin and do as they had planned. The plane soon arrived and started to circle the estate, catching the attention of not only Colin, but Jill.

Neil stopped at Lily’s and started to help Sofia and Malcolm gather the personal items. When he went to retrieve the list, he noticed an evelope. He opened it and learned that Cane had a twin brother and a sister. Neil was further stunned with the revelation that Colin was his father.