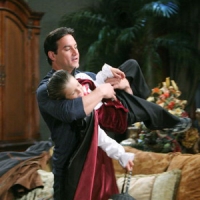 (SoapOperaNetwork.com) — Ever since Tyler Christopher confirmed reports that he had been let go from ABC's "General Hospital" back in March, it became months of dread for fans of his character, Nikolas Cassadine, as to when they'd catch their final glimpse of the dark prince. Soap Opera Network has since learned that day is Thursday, June 30.

According to sources, Nikolas will say goodbye to Port Charles shortly after realizing he has nothing left to keep him in town after he learns that his presumed son with Elizabeth Webber (Rebecca Herbst), Aiden, is not his after all but the child of his brother Lucky Spencer (Jonathan Jackson) with Elizabeth. Christopher's departure coincides with the return of Constance Towers as Helena Cassadine, Nikolas' grandmother. A "GH" representative told TV Guide Magazine's Michael Logan back in early May that Helena's return begins with her "arriving at the Spencer family home — much to Lucky's surprise — with an agenda and Aiden in tow." It remains unclear, however, whether Helena will remain in Port Charles after Nikolas leaves, but we've been told by sources that the drama between the Spencer and Cassadine clans is far from over.

Meanwhile, Davin Ransom, who portrays Spencer Cassadine – Nikolas' son with dead lover Courtney Matthews as played by Alicia Leigh Willis, will return for Christopher's last episode and depart with him as well. Ransom began playing the role on August 13, 2009 after taking over from Rami Yousef.

While he's departing Port Charles, look for Tyler Christopher beginning this fall on the new ABC Family original series "The Lying Game," which tells the story of a girl named Emma (Alexandra Chando), who finds out that she has an identical twin sister named Sutton Mercer (Chando in a double role), who was adopted by wealthy parents and supposedly living the high life until she goes missing. Emma takes it upon herself to find her sister and while in pursuit adventure ensues. Christopher will portray the role of Detective Matthews who is investigating the disappearance of Sutton. The series is being written and executive produced by former "All My Children" and "General Hospital" Head Writer Charles Pratt, Jr. and is based on the same name as the upcoming novel by "Pretty Little Liars" author Sara Shepard.