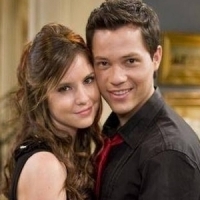 (SoapOperaNetwork.com) — Jason Tam reveals on Twitter that both he and Brittany Underwood may be returning to “One Life to Live” as former lovebirds Markko Rivera and Langston Wilde before the show is scheduled to wrap production in November.

Tam was asked by a fan if there “Is any chance that Markko and Langston will make a return to Llanview BEFORE ‘OLTL’ ends?!?,” to which the actor responded simply “You bet!” The response was short, but enough to give fans of both actors reason to hope that they may step foot in Llanview at least once more before the fictional soap town fades into daytime history. Underwood, meanwhile, has remained silent on the possible return to “One Life” on her Twitter page.

Brittany Underwood originated the role of Langston in in 2006. She exited the role on April 12 of this year after the show chose not to renew her contract. Tam joined the cast in the role of Markko in 2007, and left the show in November 2010 following a brief hiatus. He returned for two episodes in April to usher Underwood off the show.

Both characters are currently said to be in Los Angeles writing and directing the screenplay for David Vickers Buchanan’s biopic “Vicker Man.”