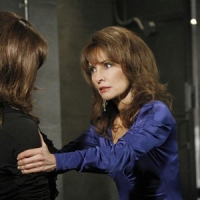 Going off of Jackson’s advice, Jane signs a business deal with Caleb which she has no clue about. David threatens to call Jack about “Erica’s” recent drinking habit if she doesn’t help him out. Jane grabs the phone from him and shoves it into her drink. While eating “Erica’s” favorite meal, Jane has an allergic reaction and runs home. David notices the allergy pills with the name Jane Campbell.

Although Jake and Cara agree to move forward its obvious there’s still a pull between them. Jesse tells Jake he thinks Tad has real feelings for Cara. Jake is feeling guilty when Amanda takes him to a picnic in the park to celebrate the anniversary of their first proposal. Jake recites his vows and kisses her passionately. Cara hugs Tad when he says he spoke to Liza about helping Griffin get only probation and Tad kisses her.

Cara admits to Griffin she encouraged Kendall to try and get him to stay and she advises him to follow his heart and go after Kendall. Cara comes to the conclusion he is afraid of love. Kendall admits to Tad that she has feelings for Griffin and he encourages her to follow through on them. Later she tells Griffin the sale of the casinos will take longer than expected.