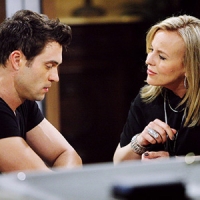 (SoapOperaNetwork.com) — After CBS posted your first look at Genie Francis as Genevieve Atkinson on the networks daytime drama "The Young and the Restless," while she conducted a photo shoot with on-screen son and co-star Daniel Goddard, publications are now giving you the opportunity to see the actress in her first scenes! The question that has everyone wondering, however, is what is Goddard doing in the image? After all, his character, Ethan 'Cane' Ashby, was murdered in February and his wife has been grieving his loss while seeing what appeared to be his ghost. Soap Opera Network has your answer.

Before Francis marks her "Y&R" debut on Friday, May 27, fans will learn that Cane has a twin brother and his name is Caleb. The soap opera twist will be revealed in the Thursday, May 26 episode of the drama series, which also marks the full-time return of Goddard to the "Y&R" cast. Anyone who ever doubted the actor's job was on the line can now breathe a sigh of relief.

As we had been told all along by sources, "the storyline is all part of a master plan by the writers and fans should continue to tune in to find out what happens next!"