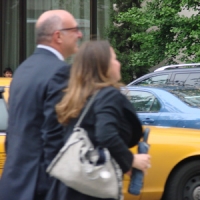 (SoapOperaNetwork.com) — Three days after we reported Brian Frons, President, Daytime, Disney/ABC Television Group was spotted chuckling as fans were protesting outside of the ABC Upfronts, Soap Opera Network has now received video of fans booing the executive as he walked over to the ABC after party.
Warning: Language inappropriate for children under 14.

Shortly after ABC's Upfront presentation wrapped, Frons and his team were crossing the street heading toward the Atlantic Grill when the group were stopped by a red light. Shortly before, fans noticed the executive within the group and began booing him. The booing continued until after he reached his destination. You can watch this go down in the video below.

As previously reported, Frons canceled "All My Children" and "One Life to Live" in hopes of saving between 30-40% per week in programming costs. "The Chew" and "The Revolution" replace the soaps first in September ("Chew") and again in January ("Revolution"). The network is reportedly interested in selling off the programs, but according to TV Guide Magazine's Michael Logan no offers are likely to be received.