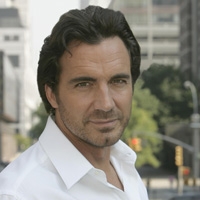 (SoapOperaNetwork.com) — As previously reported, Thorsten Kaye and “All My Children” had started talks to negotiate a return coinciding with the resolution of the soap on ABC. Through his Official Web Site Messageboard, on Monday May 9, Kaye revealed that he will be bringing back Zach Slater, in the flesh, to Pine Valley this summer to tape “a good number of shows.” The Emmy-nominated actor relates that although the official papers remain to be signed, a deal has been reached.

Kaye first aired in the role of casino owner Zach Slater on May 20, 2004. The actor became one-half of one of “AMC’s” most popular pairings of the last decade paired opposite Erica Kane’s (Susan Lucci) first born Kendall Hart (Alicia Minshew). Kaye last aired on contract on December 29, 2009. The four-time Daytime Emmy nominee, twice for his role on “AMC,” has returned for several short stints on the soap since that departure. Before joining “AMC, Kaye played Patrick Thornhart on “One Life to Live” from October 1995 – September 1997 and Ian Thornhart on “Port Charles” from May 2000 until its last episode in October 2003.

The 45-year old actor who reportedly declined “OLTL’s” request to return to usher off former onscreen love Marty Saybrooke, played by Kaye’s real-life partner (who was recently let go from “OLTL”) Susan Haskell, will begin taping at “AMC” in late June according to his web site. Barring the show then plugging new scenes into already taped episodes, which could move up the return date, this should bring Kaye back on-screen by August.