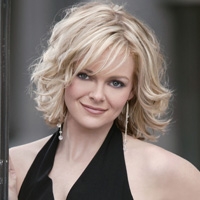 (SoapOperaNetwork.com) — A "General Hospital" representative has informed Soap Opera Network that due to illness, actress Rebecca Herbst, who portrays the role of Elizabeth Webber, is on a temporary leave of absence. As her character is currently involved in the shows big storyline leading into summer, the ABC soap was forced to recast the role with former "Days of our Lives" starlet Martha Madison (ex-Belle Black). Madison currently stars in the popular online soap, "The Bay." Madison first airs on Wednesday, June 8.

"The cast and crew of 'General Hospital' wish Becky a speedy recovery and expect her to be back at work soon," said the show rep in a statement.

According to Soaps In Depth, Herbst was diagnosed with a case of viral meningitis.