Home / News / David Canary and Julia Barr Headed Back to ‘AMC,’ Too? 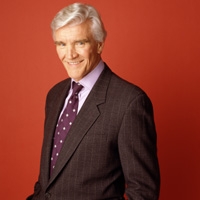 (SoapOperaNetwork.com) — In the latest issue of Soap Opera Digest, the publication reports that multiple insiders have confirmed the news that legions of “All My Children” fans have been hoping to hear since April 2010. The power’s that be at the 41-year old daytime serial are eager to lure back David Canary and Julia Barr to the canvas for a run before shop closes at ABC.

Canary, a five-time Daytime Emmy Award winner for Outstanding Lead Actor, joined the cast of “AMC” in 1983 as tycoon Adam Chandler. The male equal to Erica Kane (Susan Lucci), Adam would quickly become one of “AMC’s” most iconic characters. In 1984, Canary ushered in Adam’s better half Stuart Chandler. The 72-year old actor remained on the show until his retirement. He last aired in April 2010. Prior to his more than a quarter of a century of delighting ABC Daytime fans, Canary was best known for the role of Candy Canady in the Western series “Bonanza.” The thirteen-time Daytime Emmy nominee started his daytime career on NBC’s “Another World” as the second edition of Steve Frame.

As many “AMC” fans know, Erica Kane has never had a greater rival than Brooke English played by the powerhouse and ten-time Daytime Emmy nominee – and two-time winner – better known as Julia Barr. Barr joined the cast of “AMC” in 1976 as the troubled niece of the delightful and unforgettable Phoebe Wallingford (Ruth Warrick). For thirty years, fans marveled as Barr took us on Brooke’s journey through storyline after storyline including the ebbs and flows of many romances, the numerous verbal sparring matches with Erica, and the heart-breaking death of Brooke’s baby daughter Laura. In 2006, Barr was told she could only remain with “AMC” if she agreed to a downgrade to recurring status. She decided to exit. In 2010, the 62-year old Barr returned as the love of Adam Chandler’s life to usher Canary off the canvas in top form.

With some help from Erica, Adam & Brooke left town together in April 2010 to help heal Adam’s heart, literally and figuratively, which had suffered multiple strains due to David Hayward’s (Vincent Irizarry) shenanigans – as well as his son and nephew’s hot pursuit of his very young wife, Annie Lavery (Melissa Claire Egan). Soap Opera Network hopes we can soon report the news that Adam & Brooke are back to stir the pot in Pine Valley – and help Erica out of her latest jam! Stay tuned as details develop.