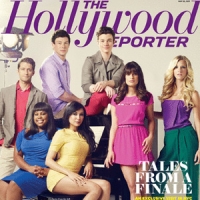 (SoapOperaNetwork.com) — You may have heard that ABC Daytime's soap opera fans recently purchased an advertisement in The Hollywood Reporter and that said fans are planning to protest outside of Lincoln Center on Tuesday, May 17 as ABC unveils its new schedule for the 2011-2012 television season to press outlets and advertisers, but I bet you didn't know that said fans received a better gift than they probably ever expected from their efforts.

Earlier tonight Soap Opera Network received an advanced copy of the magazine set to hit newsstands on Friday, May 13 with an issue date of Friday, May 20. The magazine, which features the cast of "Glee" on its cover, placed the now infamous soap fan paid advertisement on page 15 out of more than 60 pages. All we can say is congratulations soap fans, we never expected the ad to receieve such high placement beyond recognition somewhere within the magazine. Hope your efforts give you more positive results soon.