Home / News / Therapy: The Next Phase for a Bullied Individual 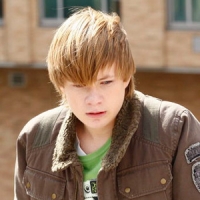 (SoapOperaNetwork.com) — Despite Shane Morasco’s (Austin Williams) recent suicide attempt, “One Life to Live’s” bullying story arc is far from over. In fact, in some ways it is just beginning. In the latest in our series of articles on the storyline, Soap Opera Network gives you a sneak peek at what lies ahead for both Shane and his bully Jack Manning (Andrew Trischitta).

From starting therapy to returning to school to facing the bully who nearly drove him to an early grave, the coming weeks will be rather eventful for Shane as he tries to return a sense of normalcy to his life. But, just like real life, things don’t always go as planned. Expect several twists and turns as the asthmatic, comic book loving teen works to bury his past.

As viewers saw first saw on Thursday, April 7, Shane was rushed to Llanview Hospital for evaluation by his frantic parents Rex (John-Paul Lavoisier) and Gigi (Farah Fath) after they managed to talk him out of jumping off a roof. Once at the hospital, he was introduced to psychiatrist Dr. Sabrina Buhari (Tamela Aldridge), to whom he finally started to open up about his problems at school. In the coming weeks, look for Shane to continue his therapy sessions with the shrink. However, Gigi becomes increasingly concerned about what is going on with her son, and resorts to drastic action, which inadvertently results in her holding the key to unlocking another mystery.  At the same time, Rex decides to take action after nearly losing his family, and has something very important to ask Gigi.

Meanwhile, Jack Manning proves he is his father’s son this week when he flat-out refuses to tell Shane he’s sorry for the pain and humiliation he has caused him recently. Fortunately, the stubborn young man will eventually receive a dose of his own medicine, which will cause him to make a surprising claim. And what about his daddy dearest Todd Manning (Trevor St. John)?  How will he respond to his son’s misbehavior when he finally awakens from his coma? Will Rex be able to control his rage when Clint suddenly shows an interest in his grandson Shane? And just what will happen when Jack and Shane encounter one another for the first time since Jack posted a nude video of Shane on the Internet?  Tune in to find out!

Bullying continues to be a growing problem in schools and communities across the country. In an effort to bring awareness to the growing epidemic, “One Life to Live” recently partnered with STOMP Out Bullying.  After weeks of being tormented by Jack Manning and his friends, which included getting him suspended from school and stealing his inhaler just as he was suffering a severe asthma attack, the story took on a dangerous turn on Monday and Tuesday, April 4 and 5, when Shane climbed to the roof of Llanview High School in scenes filmed atop the “One Life” studios in New York City. The show has also been periodically running PSA’s during commercial breaks to further address the subject.

Aitana Rinab, who played Beth, one of Jack’s co-conspirators, reflected on the storyline earlier this year with some rather interesting tweets on her Twitter page. Rinab also posted a few pictures of her Facebook page of her and co-stars Austin Williams, Andrew Trsichitta, Frank Dolce (Brad), and Don Guillory (Vice Principal St. Clair) rehearsing their scenes on the “OLTL” set, and receiving direction from Executive Producer Frank Valentini. On a related note, Chloe Nicole played one of the girls who laughed at a naked Shane in the gym in two episodes that aired earlier this month.