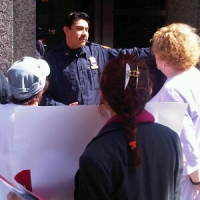 (SoapOperaNetwork.com) — On Tuesday, April 26, soap fans, who were able to make it to protests in response to ABC's cancellation of "All My Children" and "One Life to Live" in major cities across the nation, found out the hard way that dictatorships (cough, television networks) don't play with crazy – they just call the cops on them! To be clear, by no means are we calling anyone crazy (except the boneheaded movers and shakers at ABC). Unfortunately, that is what some people believe when they hear you're a soap fan these days. But onto the news…

According to those who attended the New York protest in front of the "One Life to Live" studios in Manhattan, ABC called the police on protesters! "The rally has petered a bit! But the POLICE is out her talking to the ABC peeps," said Twitter poster Xanderdash after tweeting a picture of fans protesting. "We've been asked to relocate!" he continued. Not too long ago Brittany Underwood, who recently departed "One Life" after learning her character, Langston Wilde, was being written out due to "storyline" reasons tweeted, "What's this I hear about the cops being called on the people outside OLTL?" Xanderdash responded with more details on the situation by saying "They thought we would get out of line. At one point it was 4 cop cars waiting 4 something to happen. Only one stuck around."

All the way on the left coast, things got downright nasty as a Disney employee yelled out "read a book!" to protesters in Los Angeles, including former "One Life to Live" star Catherine Hickland (ex-Lindsay Rappaport) who was in attendance as well and who, ironically, has written a book (2008's "The 30 Day Heartbreak Cure – A Guide to Getting Over Him and Back Out There One Month From Today").

A Disney employee yelled out to us "read a book!" will we be without compassion when he loses his job? I hope not #souless

Were the protests successful? While the turn out numbers weren't exactly high, that didn't stop KNBC, KTLA or The New York Daily News from covering the event. It was also satisfying to hear that passing cars were honking their horns in support of the fans and their soaps at the LA protest.