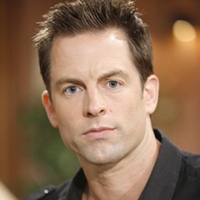 Billy gets word from Phyllis that she's found out that Adam is definitely in Thailand. He stresses that she find out whatever she can on what he's doing there. Meanwhile, Sharon, who is still in jail, gets a visit from her lawyer, Vance. He lays into her for getting a phony passport to skip town. He lets her know that she's in serious trouble. Sharon grows upset when she realizes what she's done and begins to cry. Billy arrives and offers to write up a story to help her gain sympathy from the community.

Victor is furious that Michael still can't come up with a loophole to get out of giving Nick, Abby and Victoria their settlement. When Michael mentions using Beauty of Nature as a way to paying them, Victor tells him that he's not about to part with his company to make them happy. Later on, he runs into Nick and Victoria at Crimson Lights taking jabs at Diane.

Nikki returns back to her hotel suite and replenishes the mini bar with the alcohol she drank. When the housekeeper arrives she decides to head out, but is stopped by Deacon who wants to talk to her. Nikki tells him she doesn't want to have anything to do with him and demands that he leaves. He notices something amiss in Nikki and soon realizes that she's drinking again. After he leaves, he runs into Nick and Victoria and tell him that their mother has been drinking again and needs help.

Adam is surprised to see Phyllis in Thailand and wants to know why she's following him. She corrects him by letting him know that it was Sharon that she was following. Thinking she's there, Adam starts to ask where she is. Phyllis has great pleasure in telling him that Sharon was hauled back off to jail. Adam reluctantly fills her in on Koa and the proof that he had. When Phyllis gets a text from Billy, she tells Adam that they better find Koa soon because Sharon's trial starts the following week.

Victor tells Diane that he witnessed the way she and Nick were looking at one another back at Crimson Lights; he wants her to stop it and stay away from his son. A nervous Diane feigns ignorance and hedges for answers. He tells her to do as she's been told.

Victoria keeps pressuring Nick to help her go after Beauty of Nature. Nick at first tells her that he wants nothing to do with it, especially with having to work with the likes of Tucker McCall. Victoria points out that it would be a good business venture to team up with Jabot and make a nice profit down the road. After more thinking and a little more pressure, Nick caves and tells Victoria he's in.

Back at the Newman Ranch, Michael, who has been summoned by Victor, is stunned to hear that Victor is going to take him up on his suggestion for a settlement option.