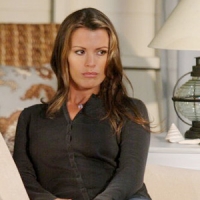 (SoapOperaNetwork.com) — "All My Children's" Melissa Claire Egan bids adieu as her loose cannon character takes a final bow in Pine Valley this week.

Melissa Claire Egan wraps up her "All My Children" stint as Annie Novak is slated to end on Monday, March 21. The Emmy-nominated actress started on the soap as the warmly received but rather docile blond in July of 2006 and turned into a much more popular but crazy, and we do mean crazy, brunette bombshell by 2008. For Annie, the stint included no less than four wedding ceremonies (Ryan Lavery; invalid, Ryan Lavery; valid, Adam Chandler, and Scott Chandler), two of which were on location, committing two murders (brother Richie Novak, and JR Chandler's aunt Di Henry), numerous assaults and murder attempts including the stabbing of the Erica Kane (played by soap icon Susan Lucci), a couple of institutionalization's, several instances of going on the run, two miscarriages, two imaginary enemies and one accidental shooting of her baby-daddy, Ryan.

Egan's co-stars will miss this "AMC" breakout star as much as she'll miss them, but are confident the actress is headed for big things. On her departure, Alicia Minshew, who has played Kendall Hart Slater since 2002, notes that while the exit of Egan is "such a huge loss" for the show that she knows her friend will "go on to do great things". Jacob Young, who played Annie's last love interest JR Chandler, adds that while he too knows Egan's "gonna go out there and become a megastar…it's tearful [for him]" to lose her. On her last day, the actor wrote his co-star a lovely note expressing his gratitude for her.

In the March 29, 2011 issue of Soap Opera Digest, which is on newsstands across the county right now, Egan reflects on Annie, the wonderful ride she has had on "AMC" and her plans for the future. The 29-year old actress goes into detail about her teary last days on set. She reflects on her relationships with confidante Cameron Mathison (Ryan Lavery), good friends Connie Fletcher (ex-Erin Lavery), Chrishell Stause (Amanda Martin), and Minshew and of course discusses working with the legendary David Canary (Adam Chandler). The actress spills her biggest regret about what did not take place in the popular JR & Annie pairing; and talks in detail about Annie's wild and wacky history from prisoner of love Aidan (played by Aiden Turner) to carving Erica Kane for Thanksgiving dinner to her bumpy ride through the Chandler men. Pick up the latest issue of Digest to read the full interview, and to find out what the actress is up to now and what she has planned for the future.