Home / News / ‘One Life to Live’ Helps to STOMP on Bullying 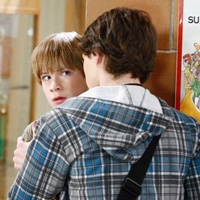 (SoapOperaNetwork) — ABC’s “One Life to Live” has partnered up with “STOMP Out Bullying” as it prepares to kick off a major storyline involving Shane Morasco (Austin Williams) and recently recast Jack Manning (now played by Andrew Trischitta), who has turned into a high school bully.

In preparation, “One Life to Live” consulted “STOMP” and “Love Our Children USA” founder and CEO Ross Ellis, who discusses the alarming increase in bullying incidents in recent years in the March 1 edition of Soap Opera Weekly.

On Tuesday, February 22, viewers will get their first glimpse of Trischitta, when it is revealed on screen that Jack is Shane’s high school bully.  However, that’s only the beginning of the story. According to “OLTL” Head Writer Ron Carlivati, Shane’s situation is only going to get worse before it get better, hinting to TVGuide‘s Michael Logan that the teen could be pushed to the brink of suicide.  Meanwhile, Shane and Jack’s parents will remain in the dark as to the severity of the situation, with the Morasco’s failing to see the warning signs, and the Manning’s living in denial that their son could be involved in harassing his classmate.

To coincide with the reveal, PSA’s for “STOMP Out Bullying” will begin airing during “One Life to Live’s” commercial breaks beginning February 22.