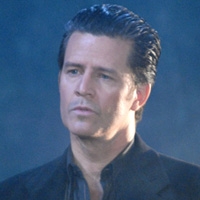 Natalie questions why Joey cares if Kelly slept with John if he’s married to someone else. Natalie trashes Kelly, and Joey trashes John.

Echo and John have a surprise encounter. Echo warns the heavily drinking John not to make choices now that he might regret later. Blair finds Kelly still nursing her hangover, and Kelly tells her she slept with John. Kelly decides she has to find a way to apologize to Natalie, and she shows up at the Lord kitchen, planning to leave a pie as a piece offering and a note and slip away, but Joey catches her.

Aubrey and Cutter work to persuade Rama to convince Vimal to take one for the team and not testify against Clint.

Dorian comes to Viki to report to her on Echo. Viki tells Dorian that where Charlie spent last night is still a mystery. Dorian chooses not to tell Viki that she suspects Charlie might have spent the night with Echo. Dorian calls Echo and tells her she’s onto her.

Tomas turns out to be Téa’s brother. She’s still mad at him for walking away from her and the family years ago and he asks her to give him another chance.