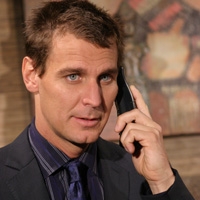 (SoapOperaNetwork.com) — Just as fans rejoice that Rebecca Herbst (Elizabeth Webber) is staying on at "General Hospital," word comes that Ingo Rademacher (Jasper 'Jax' Jacks) has been placed on a reduced work schedule with the ABC drama series.

While Ingo does remain on contract with "GH," it is shocking to see how the show has been treating its vets as of late. Of course with a reported budget cut looming over their heads, show producers could take a closer look at who is being featured every day and not the one's who aren't to blame the dramas falling ratings on.

"Dont expect to c me much on GH. once a week seems to the norm for me if that. I must have peed in the pool and was fresh out of chlorine 🙂 I'll be on the air for the next week or 2 a bit. But after that a lot less. Sorry guys. I don't know what to tell u. Its Not my call.

A "GH" representative was unavailable for comment at press time.