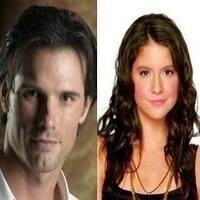 (SoapOperaNetwork) — “One Life to Live” is a buzz as Austin Peck is set to play a unique new character and Brittany Underwood ushers Langston Wilde out of Llanview in reel time.

Peck, best known to soap fans for his roles on “Days of our Lives” and “As the World Turns,” has been tapped by “OLTL” to play the role of “Rick” which, according to SOAPnet.com, is the type of guy “Llanview doesn’t really have much of. You’ll see what we mean.” No first airdate has been announced, however he is expected to begin appearing sometime this spring. Peck began shooting scenes on Monday, January 31.

Meanwhile, Underwood’s days in Llanview meanwhile are quickly coming to an end. The recently fired actress, who has played Langston since 2006, was rumored to be leaving town “amidst a big story.” However, according to TVGuide‘s Michael Logan, the exit appears to be a little less dramatic, with Langston leaving Llanview on Friday, April 8 after the young writer is offered a big movie deal.

Tonja Walker previews her upcoming return to “OLTL” as Alex Olanov, saying that “So far it is only for two shows… They are juicy…”

And more information has been released on the recent audition script for an “Assistant.” The soap is looking for an Asian or Hispanic actress in her mid to late 20s for the dayplayer role, which is described as “goth and a beautiful assistant at a Las Vegas wedding chapel.” The script ties in with a similar script for a “Justice of the Peace,” a summary of which can also be found at the above link.