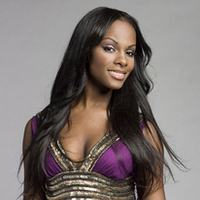 (SoapOperaNetwork.com) — Nearly seven weeks after her contract with “One Life to Live” expired, Tika Sumpter makes what could be her final appearance as Layla Williamson.

Soap Opera Network first told you two months ago that Sumpter had chosen not to renew her contract with “One Life” when it expired on July 30th, choosing instead to focus on other interests, such as her budding music and film careers. Instead, she indicated that she would remain on recurring status with the show, saying that “Whenever ‘One Life’ needs me to come and stop by and do whatever they need me to do I will be there.”

Even so, Thursday (September 14th) marked the actress’ last regularly scheduled appearance on “One Life to Live,” as Layla decided to leave town and accept a high-profile modeling job in Paris and persuading her fiancé Cristian Vega (David Fumero) to extend their engagement by one year. So, barring the occasional appearance by Sumpter in the future, fans have likely seen the last of her and her character in any real capacity on “One Life to Live.”

With her departure, only two African-American actors remain on contract with “OLTL” (Terrell Tilford and Shenell Edmonds), while roughly a half dozen others are presently on recurring status with the soap. Sumpter joined “One Life” in 2005.

Terrell Tilford (Greg) has added more airdates for his character for October, including the 1st, 4th, 8th, 11th, 15th, 18th, 21st and 22nd, along with November 2nd.  Also, the actor tweeted on Tuesday that we was “Heading to the workhouse…15 scenes…got my game face on…today is gonna be a tough one! But I’m ready!! Damn, today was kinda INCREDIBLE!!!”

Kristen Alderson (Starr) tweeted on September 11th that “I have to sing a Christmas song in November… trying to pick one..it’s hard! It has to be upbeat, but I don’t want something too cheesy lol.” Three days later she wrote that “today’s gonna be a long day [of filming].”  She also says that “Yesterday [Sept. 14th] and today [Sept. 15th] were two very long emotionally exhausting days of work. I love my job SO much,but it’s def. gonna be a nice two days off.”

Max Tapper (Det. Theo Price) taped more scenes on Tuesday, saying on Facebook that “Time to do my thing. PRICE is in the building! Lol”

“OLTL” script writer Scott Sickles comments on his Facebook page that fans can look for some of the most recent episodes that he helped write to air on September 15th, 23rd, and 29th, as well as October 7th, 15th, 20th, and 29th. Sickles also says that “Wow! Glad you all loved today’s episode [September 8th]. I can’t wait to see it!!! Thanks for watching. I hope you continue to enjoy the journey we have John and Natalie on, which I assure you will be filled with great twists, turns, ups and downs, and that he “would love to take credit for every word John and Natalie said on Wednesday [September 8th], but must acknowledge Katherine Schock‘s beautiful editing job as well as Michael Easton and Melissa Archer‘s spectacular acting and creative impulses. It really was a great collaboration.”

Although it seems like he’s been in a thousand episodes so far, David A. Gregory (Ford) stated that the September 9th episode marked his 100th appearance on “One Life to Live.”

And the show has released a new audition script for “Wyatt,” which appears to be a dayplayer role. The scene opens with “Mrs. Heidi Wilson” telling her cousin “Lauri” that she has hired Wyatt, a personal trainer, for her. Lauri, doesn’t sound too enthusiastic at the news, however, Heidi says that she needs someone to keep her mind off of “Thomas,” who is a bad influence on her. Lauri assures Heidi that her relationship with Thomas is strictly professional. Hoping to change her mind, Heidi orders Wyatt back into the room, where he proceeds to massage Lauri. Although she enjoys it at first, she promptly throws him out. As the scene ends, Wyatt tells Heidi that he’s tired and going to call it a day. It is speculated that “Heidi” and “Lauri” may really be either Kelly and Starr or Kelly and Langston.