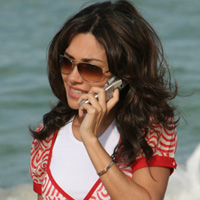 (SoapOperaNetwork.com) — As if being the most in demand actress in daytime wasn't enough, Vanessa Marcil, 41, can add newlywed and wife to her list of accomplishments in 2010 as the actress wed "CSI: NY" star Carmine Giovinazzo, 36, on Sunday, July 11 in New York City among family and friends, according to a statement released by the actress' representatives to Us Magazine. Marcil has opted to now also go by the name Vanessa Marcil Giovinazzo professionally, according to her employers at Disney/ABC.

The actress' son, Kassius, with ex-boyfriend Brian Austin Green ("Beverly Hills, 90210") was among the attendees according to Us. The eight-year old also attended the nuptials of his daddy to actress Megan Fox ("Transformers") on June 24 in Hawaii.

After a seven-year absence, Marcil Giovinazzo returns to ABC's "General Hospital" in the role of Brenda Barrett on Wednesday, August 11. The network is devoting an entire week to the actresses return, which has resulted in minor backlash from viewers that do not watch "GH" and would prefer to see "All My Children" and "One Life to Live" air in their regular scheduled timeslots on Tuesday, August 10.