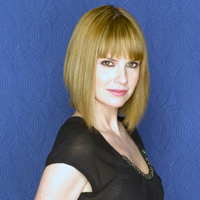 Sam verbally attacks Ethan for having bruised Kristina’s arm when he rejected her advances. Ethan finds Kristina alone at the lake house after she’s been badly beaten by Kiefer and takes her to the hospital. A traumatized Kristina, however, puts a deep scratch on Ethan’s face when she instinctively recoils from him as he goes to help her. Sonny is sickened at the sight of seeing his battered daughter as it brings back memories of the abuse he saw his own mother endure at the hands of his stepfather. Kristina tells Alexis and Sonny that Ethan was the person who beat her.

Lucky admits to Elizabeth that there’s no chance of a future for them regardless of whether or not he turns out to be the father of her unborn child.

Lulu and Kate take Maxie to the hospital when she has trouble breathing. Monica breaks the news that Maxie’s suffering from pneumonia.