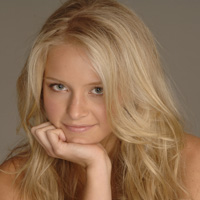 (SoapOperaNetwork.com) — Miss New York Teen USA 2009 and former “All My Children” cast member Taylor Gildersleeve, joins the cast of “One Life to Live.”

The 18-year-old actress, who portrayed Sydney Harris on “AMC” in 2006, tweeted yesterday afternoon (January 19th) that she had just “just booked a role on ‘One Life to Live!!!’ 😀 “

The exact role in which Gildersleeve was cast cannot be confirmed at this time, however, one possibility is “Hannah,” who is expected to interact with Starr and Cole.  A casting call for that role was issued back in mid-December.  Other possibilities could be “Leah,” a stripper friend of Stacy and Kim’s, or “Teen Jessica,” who will be appearing in flashback scenes.  Gildersleeve appears to have beaten out fellow actress Samii Ryan, who revealed earlier this month that she recently auditioned for an unidentified role on “One Life” as well, and was awaiting a callback from the soap.

In addition to winning the Miss New York Teen USA 2009 title, Gildersleeve competed in Miss Teen USA Pageant, but failed to make the finals.  A student at New York University, she has also appeared in an episode of “30 Rock.”

Erin Cronican also tweeted yesterday that she had “Just booked another principal role on ‘One Life to Live’-this time as a social worker.” Cronican last appeared in Llanview on October 28th of last year as a stylist to then Mayoral candidate Dorian Cramer Lord.

And the Hawaii’s Big Island Weekly reports that “It was a night of epic talent. Over 80 young people from West Hawai’i took to the Aloha Theater stage in Kainaliu on Saturday night to showoff their ability and flair for entertainment in the first Kona Youth Talent Show.

Sponsored by the West Hawai’i Community Health Center the performance was an effort to showcase the talent of Hawaii’s youth as well as act as an outreach event to raise awareness and education about the prevention of teen pregnancy….Following the intermission WHCHC showed a 10-minute film titled “Jessica’s Story,” from the soap opera series “‘One Life to Live.’ The movie depicted the cause and effect of unplanned teenage pregnancy.”  The event was held on January 17th.