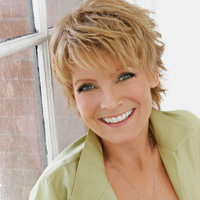 An upset Faith witnesses Damian and Lily sharing a steamy kiss. Paul’s memories of James comes flooding back when he sees his father face-to-face. Janet’s crushed to learn that she was Oakdale Now’s second choice.

The Inside Story: War of Words Leads to Tragedy

Worried about Bob, Alison heads over to WOAK to talk to Kim. When she arrives, she tells her about how Bob overmedicated Riley. Alison, however, is unaware that Bob has already talked to Kim about the matter, but puts the blame on Alison. Alison tells Kim how concerned she is for not only Bob, but also those who are in his care. Kim is furious that Alison would make such accusations about her husband and tells her that she is wrong. Unfortunately for Alison, Kim is so worked up over Alison’s words that she is hit with a heart attack. Quickly calling for an ambulance, Alison begins to administer CPR until they arrive. Meanwhile at the hospital, Alison tells Casey what has happened and he tries to page Bob. Bob, however, is so disoriented he is unable to figure out how to get the page until Riley shows up to help him.

A Closer Look: A New Heir for Stenbeck

Convinced that his mother is up to no good, Henry wants to do another sweep of her room at the Lakeview to see if he can find anything incriminating. Katie invites Audrey to join her for tea and when they are gone, Henry begins his search. While there, he discovers a few of his belongings in a DNA kit. At tea, Audrey receives a mysterious note and quickly hurries out on Katie. Katie calls Henry and tells him that Audrey rushed out in a hurry during their tea time. Sure he’s going to find out what’s going on, Henry tails her to the clinic, where he confronts her. After making wild accusations, Audrey tells Henry that she’s not a murderer, but will admit that she’s kept him from learning about his father’s true identity. She opens up and tells Henry that his father is none-other-than James Stenbeck. Floored, Henry is left in shock and finds his way back to Katie to share what he knows. Meanwhile, Audrey tries her best to work on Vienna; telling her that she needs to be the one to convince Henry into accepting who his father is and begin claiming the inheritance that he now has.